… but it turns out that SAP Extreme Sailing is indeed reason enough.

What is Extreme Sailing? 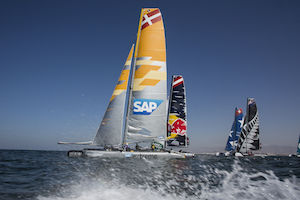 Let’s just be clear, the Extreme Sailing brand (and the reason we have allowed the use of it in full in this headline) is not an SAP brand; sometimes also called “stadium sailing” this is a sailing programme specifically designed for audience enjoyment staged in water where the boats run close to the shore — and therefore, logically, close to the crowd.

X2 twice the speed of wind

The boats run (and we will come on to SAP and big data analytics shortly) in an intense environment reaching speeds of 25 knots (in Cardiff at least), which is in fact twice the speed of the wind in the bay.

Really? Sailing faster than the wind? Apologies for a Wikipedia entry, but this appears to be true.

Sailing faster than the wind is the technique by which vehicles that are powered by sails (such as sailboats, iceboats and sand yachts) advance over the surface on which they travel faster than the wind that powers them. Such devices cannot do this when sailing dead downwind using simple square sails that are set perpendicular to the wind, but they can achieve speeds greater than wind speed by setting sails at an angle to the wind and by using the lateral resistance of the surface on which they sail (for example the water or the ice) to maintain a course at some other angle to the wind

The reason these boats “heel over” and run on one of their two hulls is where we start to get to the fun part with the mathematics and algorithms: water is x1000 more dense than air, so sailing with one hull out is faster.

… and this is where sensors and big data comes in.

SAP tags each boat with a GPS so that the race progress can be monitored and displayed in a virtual computer graphic.

There are also sensors to monitor:

Yaw (as in the side to side movement of an aircraft) is NOT measured — as this is boats, yaw is simply taken as the “heading” of the craft.

How SAP BI works on a boat

The data captured from these boats is sent to an SAP cloud service for real time analytics.

“Aggregate statistics from the sailor’s activities will show ‘patterns’ which can ultimately be used by the teams to form their next set of tactics,” added Cerny.

In break out sessions at this event, Cerny explained that mathematically the algorithms used here could be extended as SAP performs analysis on the:

2) bearing away (from the wind) and bearing into it

3) unclassified elements that have yet to be agreed upon

… interestingly, SAP does NOT currently track the sailors individual performance and behaviour using heart rate linked ‘wearables’ shirts (for example) but the firm’s Cerny says that this is coming next.

The post-race automated reports use analytics solutions such as SAP BusinessObjects Explorer software and SAP Crystal Reports as well as the SAP HANA platform to handle the increasing amount of data gathered from sensors on the boats and across the race course.

These reports can be tailored to individual requirements, with the ability to break the data down to supply, for instance, an overview of a year, a specific team, an Act, a day or even a certain race. This is an important development for teams and media in particular as it is enabling them to review and compare specific moments in the Series in an easily consumable format.

“As a team we are committed to continuously improving our performance,” commented Jes Gram-Hansen, co-skipper, SAP Extreme Sailing Team.

One does start to wonder whether data analytics really help sailors sail better — sailors have, after all, been sailing on the seas, oceans and Cardiff bay for thousands of years.

The SAP crew spoke to journalists during the event to explain that very often the data analytics results often line up with what they thought might the case anyways i.e. in terms of what their human instinct told them — so it acts as a solid affirmation.

Try holding on to a catamaran trampoline with one hull in the air and your backside over the ocean and tell me it’s dull.