It’s a well-worn stereotype, the solitary programmer (C programmers you know who you are) punching away at the keyboard in solitary confinement surrounded only by a lifetime supply of Pepsi and pizza.

New-age collaboration tools, Agile scrum methods and social enterprise initiatives will do all they can to move developers out of these old ways, but a degree of self-contained solitary focus will most likely prevail whatever the development shop scenario.

It’s interesting then to read news on the BBC News technology pages which reports that 12 programmers are being sought to go and live on a tropical island and code away to their heart’s content for two months.

The “Come Hack With Us” hackathon (come one, surely they could have called it “Robinson Cursor” or something?!) is being stages after organiser Walter Heck staged a similar retreat way up in Alaska that was apparently an “amazing experience” by all accounts.

Heck is currently looking for sponsors for his project. No kidding he is.

What is more, applications will have to make their own way to the island and pay a small attendance fee. Heck says this is a move he has taken in order to keep out those “planning to party all the time”, which he says, “could be really detrimental to the atmosphere,” after all.

Heck is based in the Malaysia and is considering an island somewhere in the Philippines.

The BBC reports that 4000 developers have already registered an interest on the Come Hack With Us website.

Perhaps its not as crazy as it sounds; Microsoft apparently used Australia as a fervent developer testing ground to work through much of Windows 7 — the country speaks English, works in relative isolation to the rest of the world’s time zones and geographies, plus they have lots of sunshine too. 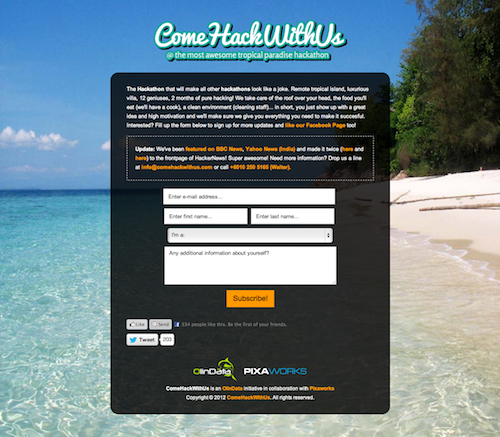