Nutanix invites the great and the good to Miami this week for its .NEXT user, partner, customer (and all round cloud storage and cloud OS cognoscenti) conference.

How is the cloud growing now? 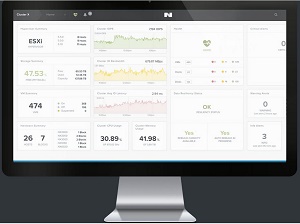 Company CEO Dheeraj Pandey says that we should be considering ‘hyperconverged’ today as a notion of making storage consumption (and the wider notion of its infrastructure) invisible to the IT operation.

Invisible cloud storage is easier to consume, obviously – and this leads us towards what Nutanix is very keen to label as so-called ‘web-scale’ technology.

We need to be careful with this term, it’s easily overused or wrongly presented.

Web-scale is NOT simple web-centric apps that can run on new cloud services – as in:

Developer dude #1: Hey man, I just built a new rate my hot dog app and it’s cool enough to put it out over the wires.

WRONG – DO NOT PASS GO this is not web-scale…well, not as such.

Web-scale is a global-class of enterprise computing.

Web-scale is, architecturally, that level of computing infrastructure (with the Nutanix notion of invisible cloud storage intelligence) that you would expect a) a large scale cloud provider to offer or b) a large enterprise to offer capabilities in.

Web-scale is a mechanical base of compute, storage and transport interconnectivity where firms concentrate on their runtime intelligence, their process rules and data model.

Web-scale is mighty damn big yet pretty nimble – get it?

NOTE: The above definitions are presented by the Computer Weekly Developer Network blog and are inspired and derived from the technology proposition that Nutanix is today putting forward.

Gartner has released an article saying that by 2017, web-scale IT will be an architectural approach found operating in 50 percent of global enterprises.

Nutanix staff author Andre Leibovici has the below (italics) to say on the terminology.

Web-scale IT is more than just a buzzword, it is the way datacenters and software architectures are designed to incorporate multi-dimensional concepts such as scalability, consistency, tolerance, versioning etc.

Web-scale describes the tendency of modern architectures to grow at (far-) greater-than-linear rates. Systems that claim to be Web-scale are able to handle rapid growth efficiently and not have bottlenecks that require re-architecting at critical moments

Web-scale architecture and properties is not something new and have been systematically used by large web companies like Google, Facebook and Amazon. The major difference is that now these same technology that allowed those companies to scale to massive compute environments are being introduced into mainstream enterprises, with purpose-built virtualization properties.

One final thought (although this story is really only just beginning) web-scale is not exclusively applicable to SDS (Software Defined Storage); rather it is an architecture model for very large distributed systems.