Electronic advertising and information sign screens are an increasingly prevalent feature of airports, train stations and many other public places.

As these devices (known as digital signage) now start to proliferate, a question arises.

QUESTION: If electronic signs themselves were capable of analysing the humans passing in front of them to tailor the information they present… would this be a helpful development that would make our lives easier, or would this appear to be a ‘Big Brother’ style invasion of our personal space as yet another camera puts our everyday behaviour under surveillance?

A quick straw poll on Twitter came up it a mixed bag of “it depends” when the above question was posed — and one or two users even said that they thought that this development was “inevitable” at some point.

Inevitable indeed, Intel has already produced this technology and the company has this week released its Digital Signage Evaluation Kit-12 (DSEK-12) designed to help streamline and encourage the commercial use of digital signage evaluation around us.

This technology is targeted at software developers working in retail and travel obviously, but also healthcare as a key vertical.

The DSEK-12 features technologies from Intel, Kontron and Microsoft in a pre-loaded and validated system. The kit includes an OPS-compliant Kontron media player KOPS800 based on 3rd generation Intel Core processors as well as a 180-day evaluation copy of Windows Embedded POSReady 7.

The DSEK-12 comes pre-loaded with Intel Audience Impression Metrics, a software solution capable of “anonymously monitoring” viewer metrics, such as gender, age bracket and length of attention all in real-time.

This video shows that these signs will now able to register when a teenage girl is passing by and change the image on display to an advertisement for a ladies shoe shop. Equally, the sign will know if it’s an older man and switch the ad to golf clubs. The signs are pre-loaded with a massive amount of data on human size and shape, so by using the real time processing power that these systems come with, they can change their information appropriately.

The programming potential appears to be almost limitless and the imagination and creativity of the software application developers (and Intel engineers) that will now use this technology should shape this technology’s onward development. 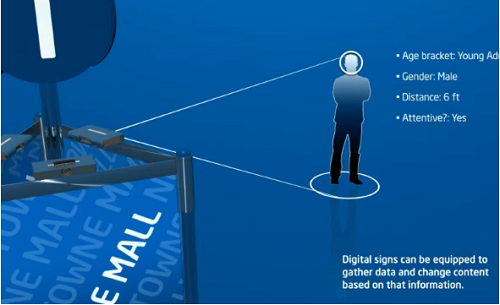