It’s rare that I ever have cause to spend a 24-hour period offline, but when Mrs B asked to go and see the ‘jewel of the Med’, a trip to the Aegean paradise of Santorini was inevitable — but could I keep away from technology for a whole long weekend? 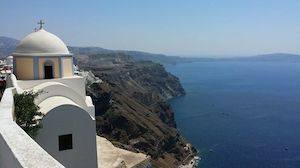 Firstly a word of travel know-how: kayak.com has a really usable location deal finder that lies somewhat hidden from the main page menus.

Click MORE > EXPLORE > and you will find a ‘zoomable’ map with price tags sitting on destinations that directly link to flight bookings.

This is how we got a flight deal for roughly half of the normal cost, because it’s fast and easy to look up.

Next we come to the matter of devices…

I travelled with an iPad mini (for BBC iPlayer downloads), a Nokia 1020 (for phone connection and camera), a Samsung Galaxy (for camera and maps), and finally an HP EliteBook tablet with keyboard and full Microsoft Windows 8.1 Pro (for work).

Yes, I know I could have just brought one device, don’t let’s go there.

The HP ElitePad tablet is easy to love, the keyboard option transforms it into a working PC and the keys travel more easily than on the Microsoft Surface Pro, despite being smaller ‘chicklet’ style buttons. The touchscreen works extremely well (even though I still prefer a mouse) and there is the HP Mobile Connect SIM card option (which I have) meaning I can post this blog while on the train home from Gatwick.

Next we come to technology on the ground in Greece, there’s not a lot of it.

I wrote a piece a few years back called a “Norwegian software odyssey” while I was working in Oslo as I was impressed by the general level of computerisation I found while travelling around. 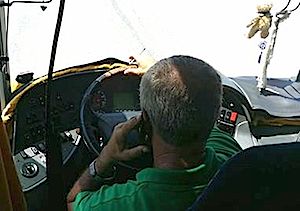 Santorini isn’t quite as technologically developed, obviously – and it isn’t going to make it up there on the list of Top 10 great European cities with free WiFi, but you can pick it up in most bars if you are prepared to start some pretty heavy drinking whenever you want to log in.

That being said, the Greeks do appear to love their phones as much as any other race —

Our bus driver thought nothing of lighting up a cigarette and then making a mobile phone call, all while driving down the side of an 800 foot ravine.

Many of you will know this already, but it’s worth mentioning for those that don’t. The iPad and Android map applications will keep a journey route in the memory cache and track your progress along it with a GPS locator ‘dot’ even when you leave WiFi coverage. This helped us lots of times when we were out and about.

So anyway, after five days away from the keyboard I was starting to suffer from too many Gyro-Souvlaki kebabs and develop Greek style blog-hurt… now back to cyberspace-proper and the rest of the world.