The Holy Grail of application development is online apps that work with great WiFi connections right? There’s nothing like being able to download all your favourite data and surf the web, especially on a mobile device, right?

The thing is, national city-wide WiFi zones haven’t quite arrived yet have they? Also, what about all those times when coverage is hard to get or prohibitively expensive – think hotels and planes as the prime examples there if you will.

So what we really need are downloadable apps for, say iPhone and iPad users, that work in full when not connected – but yet emulate the full functionality of an app that we would normally expect to only use online, right? A street map would be a great example here.

It’s not as fanciful as it sounds, Skobler has just released ForeverMap Europe for the iPhone and iPad (an Android version is coming soon) using data from the open source OpenStreetMap project. 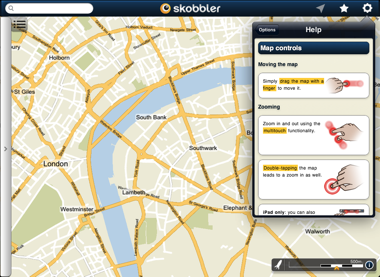 Berlin-based skobbler has been independently developing navigation software for mobile phone platforms since 2008. Since its UK launch in June 2010, skobbler says it has topped both the free and paid navigation category in the UK Apple App Store for four consecutive months with UK downloads exceeding 200,000 to date.

“This is It’s something that hasn’t been done before (at least not for an entire continent) and we believe that there’s a real need for people who either travel a lot or who don’t have a mobile data connection in their device (i.e. all iPod and non-3G-iPad users). So we developed ForeverMap from scratch, using our own map compression and routing algorithms,” said Marcus Thielking, co-founder of skobbler. “We want to create an array of ‘lighthouse’ products that show what’s possible based on the OpenStreetMap in all sorts of categories on various mobile device platforms.”

ForeverMap Europe costs £3.49, while TomTom Europe will set you back around £60.