Why is this (potentially) interesting?

Well, the suggestion is that this could make life easier for DevOps and admins responsible for content delivery. Yes, it’s Con-Deli DevOps, obviously.

Customers use Akamai as a CDN and have put Varnish in front of it for performance gains. However, combining both comes with downsides like synchronisation problems or double work.

Both of these issues are now formally addressed by the connector.

In detail, the connector: automatically signalises the effects of cache rule changes in Varnish to Akamai in real time; it automatically synchronises purge requests with Akamai; and it ensures proper configuration of core operational elements.

According to a statement from Varnish, the scale of the Internet itself and the complexity of its underlying architecture is one of the main reasons for slow content delivery.

Down on the upside (of the Internet)

The firm says that the downside to the Internet being a decentralised ‘network of networks and interconnected nodes’ is that you never know which way your content will travel through it, making fast content delivery challenging to guarantee.

Content delivery networks (CDN) arose in part as a response to this inherent weakness.

“CDNs are typically offered by providers like Akamai to deliver content through their networks, guaranteeing better performance, higher availability and more security than the anarchic Internet. They are architected as a distributed system of servers across many networks and datacentres, with an origin server at one end (in the cloud, in a datacentre, or both) and the audience at the other,” said Espen Braastad, VP of engineering at Varnish Software.

A CDN can provide many benefits, including offering a protective security layer, shielding the origin from attacks or overloads. One of the technologies used to deliver better experiences and therefore drive better audience engagement is caching.

Braastad explains that the Akamai Connector for Varnish uses the Varnish VMOD extensible framework (a kind of framework for Varnish plugins) to add Akamai-specific functionality to instances of Varnish. It synchronises the origin and Akamai settings, ensuring that Akamai best practices are implemented consistently and correctly across the whole infrastructure.

“Delivering fresh content when different systems are involved can be quite complicated. Content updates are usually executed where the content resides on the server. This means that older content might still be in the cache, so the user will not see the updated information immediately. In this case, the cached content must be deleted, or purged. The concept, known as cache invalidation, was referred to by internet veteran Phil Karlton as one of two ‘hard things’ in computer science,” writes Braastad.

If you purge cacheable content locally, the Akamai Connector for Varnish will automatically echo back the changes to Akamai and synchronise the caches, ensuring cache consistency across the whole infrastructure.

The Connector further ensures that core operational elements are configured properly, orchestrates Edge Side Includes (ESI) processing on the Akamai platform and applies best-practice Akamai settings at the origin server.

CDNs are the future, again?

A CDN can cache the content closer to the user instead of the requests and responses for content having to connect all the way across the Internet back to the origin server.

As we depend ever more heavily on the Internet and the so-called cloud model of service based compute, analytics and storage… a more intelligent era for DevOps centric accelerated content delivery could be upon us.

The new era will not come without configuration and management complexity, which is clearly what the Varnish and Akamai are trying to address here. 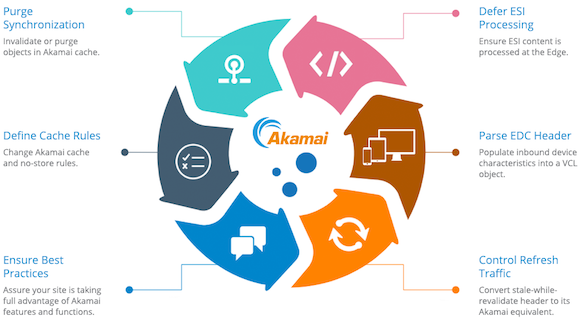