Is cloud impacting real programming in software application development environments and are we creating a new breed of cloud programmer that behaves differently?

Bereft of a ‘Magic Quadrant’ to reference, Forrester earlier this year proffered forth claims that “less than quarter of all developers are using cloud” in its estimation.

There was some substance to validate this opinion; the research company explained that so-called cloud developers jump on new desktop technologies faster.

The Computer Weekly Developer Network likes Forrester, a bit — but we like cloud developers themselves more. 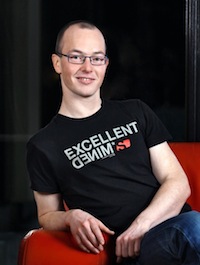 “Speaking as a developer who has worked on both sides of the cloudy divide, I’ve seen all of the personality types listed in both camps (cloud developers and non-cloud developers) — but it’s not the personality mix of developers that varies, so much as the rigidity of the framework they are working within,” said Tomas Soukup, product development manager at Samepage.io, a social collaboration tool company focused on online product development.

Soukup says he can understand that cloud developers are seen as ‘risk takers’ because they are able to innovate and test new ideas quickly on their customers in real time.

But what are they really risking with cloud? If they get it wrong, they can usually find the bug and fix it the next day.

Why cloud programming is different

“By contrast, someone working on the latest version of software that is downloaded by millions of people, Microsoft Office for example, has to be more risk-averse for two main reasons. Firstly when the software is downloaded, they cannot easily see exactly what the customer’s problem is which makes locating & fixing a bug more difficult. Secondly, the correction is more difficult to distribute widely due to the issues of delivery via download,” he said.

Soukup says no, he doesn’t think so.

He does at least contend that perhaps it’s true that a cloud developer is more willing to question conventional ways of doing things and debate their fellow team workers but that’s probably more a characteristic of a younger age profile than the work itself.

“This speed of deployment certainly does mean cloud developers can ‘feel more challenged and successful’, though whether they actually are, is also questionable. On a final note, the way the personality types are presented seems to suggest one type of developer is better than the other. I can’t agree with that. Same horses, different courses,” he concludes. 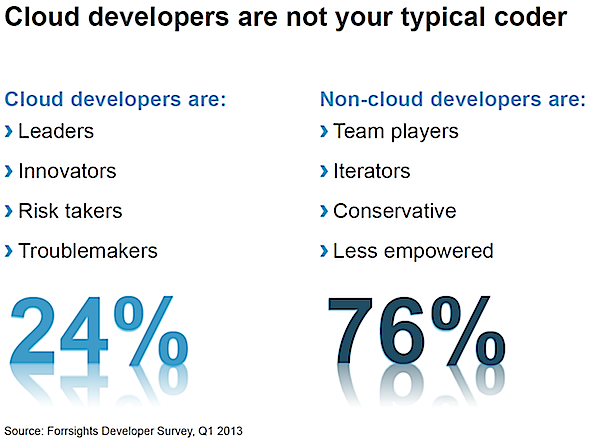