Software runs the world, yes – but it typically needs hardware to run on and even the Computer Weekly Developer Network is occasionally tempted to focus on a piece of kit that ‘does what it says on the tin’ – and anyway, it’s usually something with a good dose of intelligent embedded software in it anyway.

Such it is then with Airtame.

We have looked at wireless streaming devices before and struggled with installation, cross-platform compatibility, core usage and GUI effectiveness and their core ability to ‘hold onto’ a connection between the transmitting device and the object for broadcast.

Airtame plays in this same wireless streaming devices market, but is more effective than other similar products by virtue of it not appearing to suffer from the above-mentioned performance limitations.

This device slots into the HDMI port of a television, monitor or projector and once connected to the Wi-Fi network, anyone who has downloaded the app will be able to present – or, in our case, stream either live or recorded (or ‘burnt’) TV programmes and movies to a TV screen.

Full screen mirroring allows users to share work from both Windows, Mac, Linux and Chromebook – so, none of those cross-platform incompatibility issues.

With multiple Airtames, one display screen can be shared on many screens; and this could be a use case for large auditoriums.

Customers include schools and businesses — but we found this product ‘did what it says on the tin’ in terms of being able to connect both tablet and PC to a television some 10 yards away, although the range is wider than that.

The only drawback? Airtame needs its own power supply (via USB to electrical socket) to operate, where others often drawn enough power from the HDMI port itself… but hey, your television (or auditorium stage) probably has a power supply near it doesn’t it?

According to the company, “Our option to remotely manage all your Airtame devices through Airtame Cloud, is greatly appreciated by all IT admins. They can quickly check to see whether devices are online and diagnose what needs to be done, in case something is not working. They will be able to access and edit device settings directly from the Cloud without even having to open up the Airtame app, saving them a lot of time and effort.

When no one is actively streaming, Airtame can be turned into a digital signage solution, putting valuable information in front of students or employees including sales figures or upcoming lessons.

The product is priced at 299 Euro here. 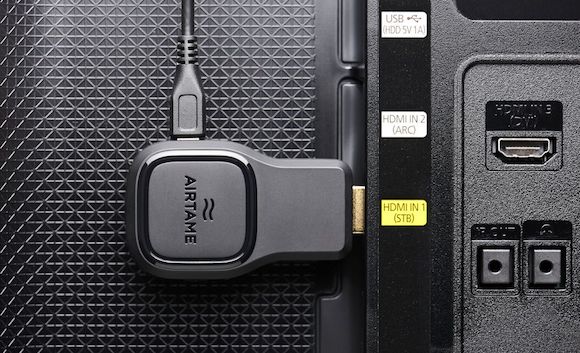 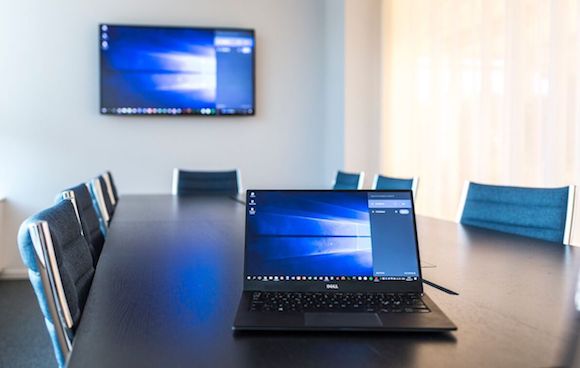