Windows 8 has been doing its level best to try and wean us off of the WIMP “windows, icons, menus, pointer” standard that has characterised the lion’s share of our computing experiences for the last couple of decades.

But how do the software application developers feel?

Attend any Microsoft-hosted US west coast located developer event and there will still generally be whoops of delight for every new feature or use case the Windows evangelist team cares to wheel out.

Developers have perhaps been less enthused out in the rest of the real world when it comes to their reaction to Windows 8.

Reports suggest that the firm’s invitation to code natively for Windows 8 and potentially leave aside a degree of their .NET, Windows Presentation Foundation (WPF) and Windows Communication Foundation (WCF) skills has not gone down well with programmers.

So what comes next?

After Window 8 we find Windows (codename) Blue lying in wait. Call it Windows 8.1 or Windows 9 or Windows Blue if you wish, details are sketchy at this stage.

NOTE: Actually Windows Blue is Windows 8.1 if anything i.e. it is an augmentation to the Metro interface and is not a complete new version in any form.

For developers already committed to a “mobile first” development imperative, Windows Blue will probably sounds like good news if it indeed does arrive with its anticipated more standardised software base shared between the full Windows proper and the Windows Phone OS.

Even bigger size “livetiles” and even smaller ones too are likely to be an element of Windows Blue – a feature that evidences greater proximity with Windows Phone OS.

While a lot of this is rumour-based conjecture (albeit intelligently written) at this stage, there appears to be a consensus of opinion over Microsoft’s future release cycles i.e. updates to the Window operating system will now appear on a much more regular basis (perhaps annually) – so for developers this could and should mean less of an incremental shock (than say, between Windows 7 and Window 8) as we go forward.

Will Windows Blue act more like Windows 7 and previous versions?

Well almost but not quite — it is thought that Microsoft will build in functionality to allow two windows Windows to be displayed together and “snapped” alongside each other side by side.

Plus there could be an option to be able to display up to four separate apps simultaneously — almost enough for anybody, surely?

Website theverge.com has published the below picture as part of a full gallery of Windows Blue screenshots: 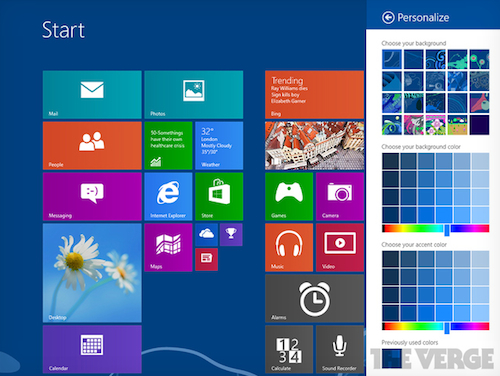