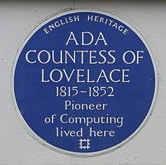 NOTE: Ada is named for Augusta Ada Byron, Countess of Lovelace (1815-1852), who helped Charles Babbage conceive how programs might run in his mechanical Analytical Engine.

The use of Ada is spreading

AdaCore says that today, in 2013, as these considerations for safety and security affect more and more projects, the use of Ada is spreading across the world and into multiple sectors.

To meet this need AdaCore University has been created this September.

It is a free online resource centre that offers pre-recorded courses and other learning materials on Ada, with access to AdaCore’s open source GNAT Ada toolset for writing and running example programs. Students at all levels of experience and expertise can begin writing programs quickly and can proceed at their own pace.

AdaCore University courses educate through examples, allowing students to see, understand and experiment with most features of the Ada programming language. Drawing on the experience and teaching credentials of Ada experts such as New York University Emeritus Professors and AdaCore founders Robert Dewar and Edmond Schonberg, the courses explain Ada’s technical concepts with insight into the rationale and usage of particular features.

Ada 001, “Overview” – a module that presents an overall picture of the language and that allows students to write small programs; and …

Ada 002, “Basic Concepts” – the first in a formal series of Ada classes, introducing basic Ada programming concepts and allowing students to write programs based on these features.

Both of these modules, and all future courses, provide sources and installation instructions for all learning materials and tools. The courses cover the latest version of the Ada language (Ada 2012), and students have access to AdaCore’s GNAT Ada development environment and programming tools.

AdaCore University is an ongoing, live project that will be expanded to include more advanced courses on Ada. It is endorsed by leading non-profit organisations dedicated to sustaining and promoting the Ada programming language, including the Ada Resource Association, SIGAda, Ada Deutschland, Ada France and Ada-Europe.