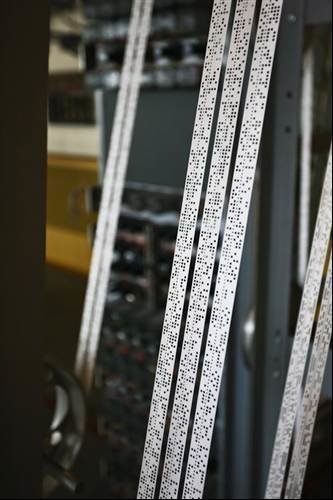 The input stage comprised two sets of pulley wheels driving two loops of teleprinter tape in synchronism. One was the message tape and the other was a locally produced sequence of test patterns. The hole/no hole patterns on the tapes were read photo-electrically at up to 2000 characters per second and converted into electrical pulses. The pulse streams were compared by the electronics and a high speed counter generated the required output. (The machine on display at TNMOC is in the process of being rebuilt.) The Heath Robinson saved many days of tedious manual analysis but proved to be unreliable. All of the machines were designed and produced by the Post Office Research Station at Dollis Hill in north west London where, under the direction of Tommy Flowers, a much faster machine, Colossus, was designed. The aptly named Colossus was the world’s first electronic programmable computer. It was an incredible achievement and revolutionised the process of message decryption.