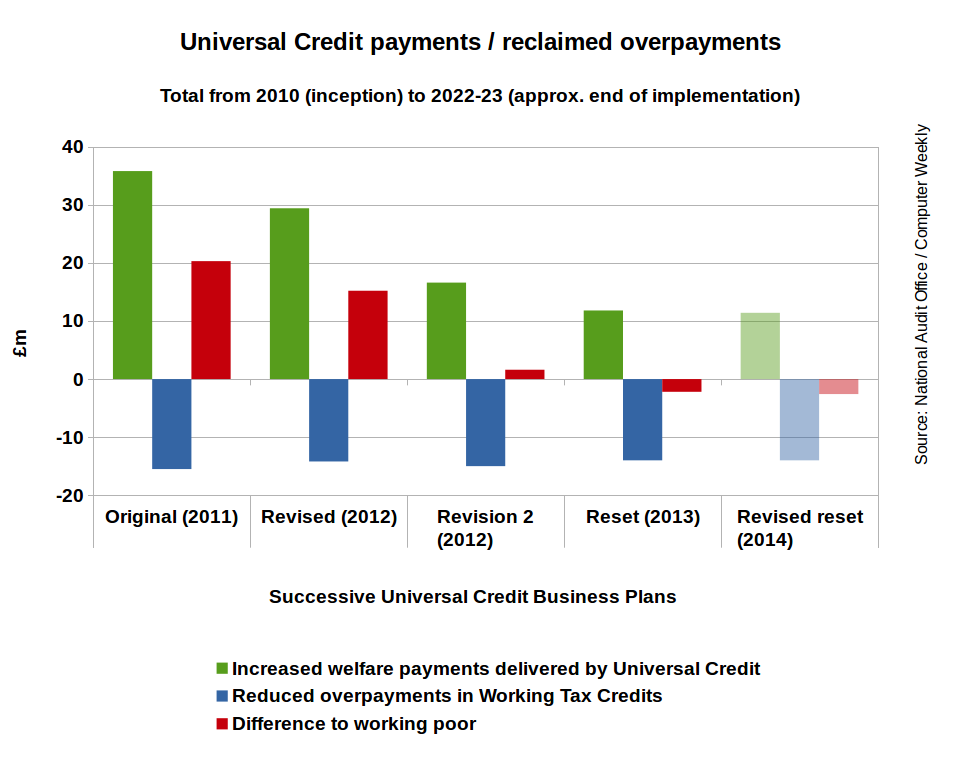 Cuts and computer problems are responsible for Universal Credit’s failure to “make work pay” as work and pensions secretary Iain Duncan Smith said it would when he sought parliamentary approval for the scheme in 2011.

That’s not to say it’s not worth the continued effort to get it right. But the chart above shows how weakly the coalition government’s revised plans for Universal Credit will help the poor. Their worsening circumstances were arguably this government’s greatest responsibility and greatest failure.

The chart shows how the government has diminished Universal Credit’s power to make work pay with repeated revisions to its plans since 2011.

Universal Credit is set to take more money from the poor than it gives them after the Department for Work and Pension’s most recent revisions to the scheme’s business plan.

Parliament agreed the scheme in 2011 on the understanding that it would drastically increase the amount of income support it distributed to people in low paid jobs.

The coalition’s 2011 Universal Credit business plan promised to increase welfare by £38.5bn over the first twelve years from its inception, according to DWP estimates reported by the National Audit Office in November.

It would simultaneously save the government £15.5bn by reducing welfare payments made in error.

The balance would be a boost to the poor of almost £20bn.

But the government cut the amount of welfare payments that would go through Universal Credit by two-thirds in successive revisions of the schemes’ business plan since 2011, according to the Institute of Fiscal Studies. It cut the Universal Credit three times after 2011.

It had cut Universal Credit so much by its last revision that it would actually claim more back in overpayments than it paid out in support of people on low incomes.

Universal Credit would make the poor worse off by £2.2bn under the 2013 business case that followed the Cabinet Office’s “reset” of the programme in 2013. 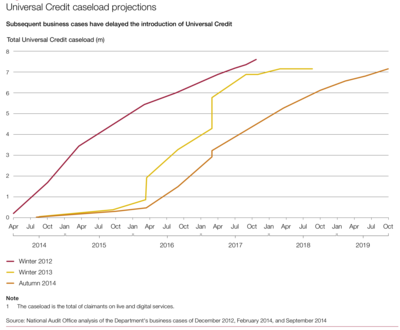 But coalition cuts only explained part of Universal Credit’s impotency.

The amount of benefit it would administer had also fallen because the coalition had made such a bodge of its implementation, IFS senior research economist David Phillips told Computer Weekly. DWP was cranking the Universal Credit system up so slowly that it would be years yet before many people were subscribed to it. So the amount of money it would administer would be much lower until much later.

The NAO had assessed Universal Credit’s success according to how its numbers stacked up during the first 12 years of its life, starting from its inception in 2010. After by the DWP’s latest revision, it would still be loading eligible people onto the system after 2020, 10 years from its inception. The end-date wasn’t even in sight.

By mid-2017 – almost two-thirds into the NAO’s assessment period – only half the eligible people would have been loaded onto the system.

The degree to which Universal Credit’s diminishing revisions were due to its bodged implementation was obscured from the NAO report on that very implementation in November.

How much of it was due to cuts and how much to bodge? The NAO didn’t break the numbers out. Its assessment of Universal Credit’s implementation papered over the bodge.

The real reckoning of Universal Credit won’t be a measure of how much it got done while it was still being implemented. It will be what it achieves for the poor when it is finally done. But even the NAO’s flawed assessment of its implementation was incomplete. Because the DWP withheld the recent estimates from its 2014 business plan for Universal Credit. Even since then there’s been more cuts and predictions of more delay.