It was kind of love at first sight.

Editorial disclosure: I paid in full for this product and received no input from Samsung for this story.

It’s a bit like smartphones, I personally don’t think any of them (even the 6-inch plus-sized units) are big enough… and it’s the same with monitors i.e. they’re not portable and you’re not going anywhere with them, so why not get the widest one you can afford?

Okay I do agree that there’s a limit with televisions i.e. the current breed of 85-inch sets is pretty full-on and you do need a home cinema room to have one… and projector screens that fill up a whole wall are no good for gaming as the massive image just makes you dizzy, but I digress, it was love at first sight.

I walked into a Costco in the USA and saw the Samsung 34-Inch SJ55W ultra-wide monitor on sale for $250, which is about £180 plus around a tenner in tax. That seemed cheap – Amazon UK has it for almost double that at the time of writing, but Costco USA is known for massive discounts on electrical goods.

So, I bought one.

This is widely billed as a gaming monitor, but my first instinct (as a technology journalist, if I may be so bold) was to be able to use it for work and to be able to have three documents on-screen (or one Tweet stream, one Google Docs, one calendar and so on) concurrently.

It does work just fine in that use case, but I had to set it up first.

There are two inputs, so you can plug in your laptop and Xbox (PlayStation if you must) at the same time. Despite me connecting a now-outdated Xbox One, the screen rendering worked perfectly filling up the whole display without distortion and without image quality loss and without me having to mess with the Xbox settings controls.

Really good performance, crystal clear with games and movies and just a good deal for the money. The Samsung 34-Inch SJ55W ultra-wide monitor is just that little bit ostentatiously wide to make you feel good, it’s almost silly-wide, in a good way.

No speakers, no problem?

Okay so there are no speakers, but you can plug a speaker into the phono jack and most Xbox users will be using Bluetooth headphone these days anyway.

I have been using it for work and play at the same time, well, on the same day at least and Amazon UK reviews show web developers have used it happily for work pursuits.

As we’re here to game too, this year’s Sniper Elite 4 is quite glorious and Dirt 4 plays well too… Assassin’s Creed Valhalla is also worth firing up, as of course is the joy to be found in any of the Just Cause series.

Christmas (sorry, the ‘holidays’) is coming and let’s hope another lockdown is not looming, either way… I treated myself early. 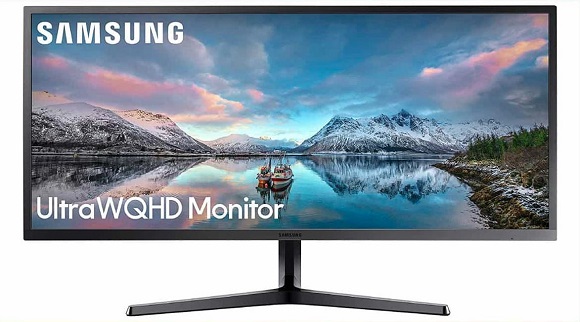