As the line between PCs and smartphones continues to blur, we’re likely to see more and more features that we would normally expect to feature on a laptop (or a desktop, even) being incorporated into the devices in our pockets.

The RedMagic 7 has some of the PC-like features that were a surprise to see on a mobile unit; its high-speed turbofan and approach to heat-dissipating materials that feature in its build could mark this product out for heavyweight users.

Although targetted at the home market, there’s enterprise usability here with the 6.8-inch large screen (please could someone make an 8-inch screen smartphone soon?) that features a 165Hz refresh rate and a multi-finger 720Hz touch sampling rate.

The brand name behind RedMagic is actually Nubia and the company has shipped this unit with the Nubia launcher running the RedMagic 5 operating system on top of Android 12. There’s no option to be able to over-ride the launcher with one of your own choice, but it’s perfectly workable and not prone to the unpleasant ‘several screens of apps’ that some Android units throw up upon first power up.

In terms of core specs here, this device comes with a Snapdragon 8 Gen 1 processor, so it’s fast. There’s charging via a 65W fast charger and a special ‘triggers touchpad’ for work downtime and game uptime.

What marks this smartphone out is its adoptability (perhaps adaptability too, but we did mean its adoptability) given that some devices are just not simple and straightforward to set up to a user’s preferred preferences. The big screen is crying out to be used for text editing and of course it works well for downtime pursuits as well (there’s a special dual shoulder trigger built onto the corners of the device), so it has appeal on two levels.

With some Chinese smartphones (surely we don’t need to mention which brand name) really not providing full functionality when used outside of the motherland, we had no problems with the RedMagic unit. There was a strange boot-up quirk upon first firing up the device, but it went into its own version of ‘safe mode’ recovery and rebooted fully successfully.

There’s a fingerprint sensor that doubles as an increased heart rate detection function, which could have a variety of application use cases and is being built this way across a number of manufacturers.

The cooling system claims to be able to provide a 35% air volume increase with additional air coming from the duct on the RedMagic back cover. The other so-called ‘space grade’ materials include a VC (vapour chamber) heat sink, use of high thermal conductivity gel and a superconducting copper coil.

The camera is not the star here. It’s pretty good, but it’s no Huawei Leica superstar with the (arguably) gorgeous quality that those devices deliver. So while there is no telephoto lens, the zoom is okay and it would certainly suit the casual users

Prices start at around £500 and although battery life is only around 6 hours under heavy use, many users will keep this device for home use and the fast charge does enable anyone to top it up pretty quickly.

Finally here, there’s a headphone jack… and although most of us have Bluetooth headphones and all the latest earbuds with wireless connectivity, a headphone jack will be a welcome addition for some.

Overall, you can’t ignore the RedMagic 7 for its home entertainment features in the form of games and multimedia entertainment, but it has enough diversity to be considered as a ‘main phone’ for enterprise use (after all, what techie doesn’t have a few games installed on their smartphone) as well. 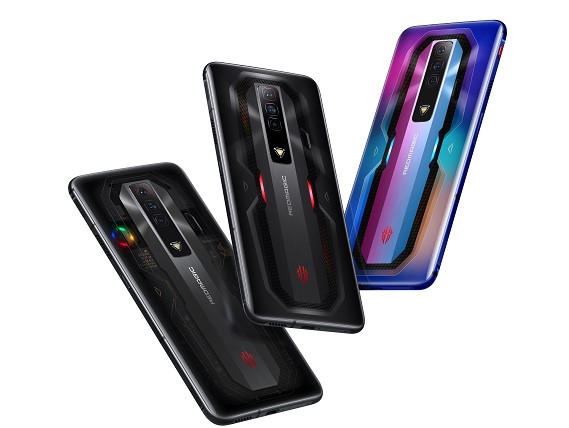