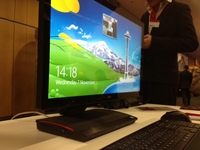 Fujitsu launched its new X-Line hardware products at the Fujitsu Forum in Munich this week and I had a hands on experience with the Windows 8 PC that claims to have a stand which swivels and twists the display to any angle, while also boasting facial recognition technology.

Now it’s always a little awkward doing live demos, but after three failed attempts to show me how the facial recognition feature worked, I began to feel a little offended. I was starting to think that perhaps I did look a little bit like the middle-aged German man who was demonstrating the product and who’s face the computer was supposed to recognise (not mine!) 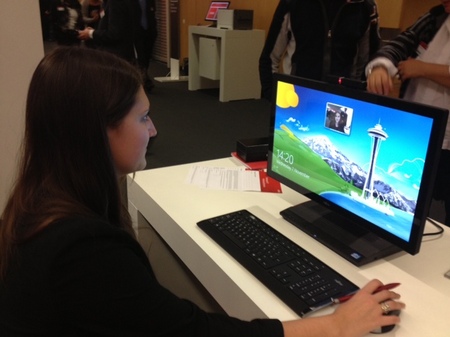 After a few very awkward minutes, I was told that the product was actually set to another woman’s face with the gentleman’s details saved in preferences. Confused? Me too! Well, even if the computer wasn’t recognising my face for a man’s – unless the woman in question was my long-lost twin – I’m not rating the facial recognition technology.

The Fujitsu representative told me that there could be a “glitch in the system” and that the Esprimo is not designed to be used for “high security” but for “ease of use”.

While it was very quick to recgonise faces and log-in, it would be nice if it recognised the correct face to provide access. So no installing the Esprimo into bank security systems anytime soon then?

While I’m leading this post with my experience with the facial recognition technology, this product’s main selling point is the large touchscreen display and its moveable stand.

“These mechanics make it usable for Windows 8 touchscreen because it is not natural to touch a desktop,” said Joseph Reger CTO of Fujitsu, at the Forum. 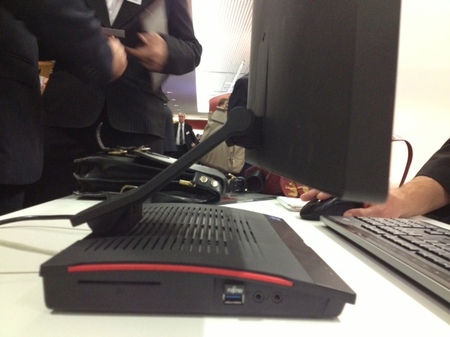 Well Dr Reger, I’m not sure I agree with you…

I found it very stiff to manoeuvre and just plain awkward. It could tilt back from the regular desktop position to flat as use as a giant tablet, but you would have to stand up from your seat to actually use it comfortably anyway, as the photograph below shows. 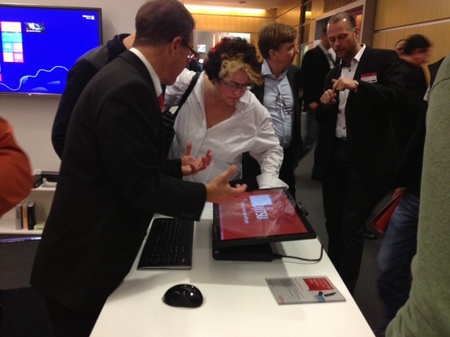 It also didn’t “swivel” as much as I expected from the description on the press release. It simply tilted back and forth.
As a product which apparently demonstrates the importance of Windows 8 on the desktop, I feel it could have been designed to make the operating system even easier to use.
What large displays optimising the touch Windows 8 experience need is a movement back and forth towards your body to bring the screen within much closer reach. With a large distance between you and the touchscreen you arms would become tired after a short while, and with Fujitsu’s answer, apparently so will your legs.