Away from the well-trodden conference halls of Barcelona, London, San Francisco and Las Vegas, we now have an opportunity to focus on a different zone where a new breed of software and technology services companies are increasingly coming to the fore.

That space is Israel… and, if truth be told, the interest being generated in this country’s technology space is both local and global in nature.

In the past year, the total value of startup acquisitions and IPOs was $9.9 billion, reflecting 80 deals with an average deal size of $124 million. Further, 30 of the 500+ startups with a valuation over $1 billion were founded by Israeli entrepreneurs.

The OurCrowd Global Investor Summit Israel 2020 is staged in Jerusalem from February 13th to 14th… and our editorial team will be there in force.

The event’s organisers remind us that OurCrowd is behind some $1.3 billion in committed funds for around 170 startups and over a dozen venture funds since its inception in 2013.

The brainchild of CEO Jon Medved, OurCrowd’s annual Summit last year saw 18,000 people register to attend from 189 countries (that’s out of 195 countries on the planet). The organisers say it is the fastest-growing tech event the largest equity crowdfunding event in the world.

Although many events of Summit Week are open to the public in parts, OurCrowd Summit gravitates to three main days of invite-only presentations and meetups (February 11-13). As well as the more corporate-level gloss, we can expect VC forums, insider access to accelerators and labs, touring opportunities and some local Israeli hospitality.

The theme for the 2020 OurCrowd Global Investor Summit is “Startups: Going Beyond”… a tagline meant to perhaps convey the potential for tech startups to plug into the power and breadth of the cloud and go ‘webscale’ i.e. as wide as the web, as big as the data lake needs to be and as broad as the compute engines driving innovation in this space can be pushed.

“From AR-assisted brain surgery to AI that warns of natural disasters to a brain-computer interface that treats spinal cord injuries, startups are creating astonishing solutions to old problems, overturning industries and changing people’s lives for the better,” noted the OurCrowd events team, in a pre-event statement.

The organisers promise us a ‘veritable multitude’ of tech demos and so some highlights to look forward to include:

OurCrowd insists that it is the most active venture investor in Israel today and it vets and selects companies, invests its capital and provides its global network with access to co-invest and contribute connections, talent and deal flow.

OurCrowd founder & CEO Jon Medved said, “The OurCrowd Global Investor Summit is the premier showcase of Israeli technology and a golden opportunity for the entire ecosystem to meet and get business done. We have seen long-term strategic partnerships and hundreds of millions of dollars of investment emerge from the meetings and events at the summit. Many of our participants [72% of applicants for the 2020 summit] are repeat attendees.”

The organisation says it builds value for its portfolio companies throughout their lifecycles, providing mentorship, recruiting industry advisors, navigating followon rounds and creating growth opportunities through its network of multinational partnerships.

Other aspects of the Jerusalem show itself include unfunded startups pitching live throughout the day at the ‘Open Mic for Entrepreneurs’ slot, a gathering described as a Hyde Park Speaker’s Corner for global tech dreamers.

Most important, the organisers stress, the Summit can provide a preview of future startup success. Thirteen startups that appeared onstage at the past four Summits had a notable acquisition or IPO within a year. On the mainstage alone, six startups had major exits within three months of the Summit. For instance, last year Beyond Meat was featured on the main stage and two months later had the biggest IPO in a decade. Two years ago, JUMP presented and was acquired by Uber two months later. Three years ago, Intel acquired Mobileye two months after it appeared on stage.

Some of the startups exhibiting or demoing are:

As is customary these days, OurCrowd has the full selection pack of social streams supporting its event. The event hashtag is #OurCrowdSummit and the Twitter stream is @OurCrowd with CEO Jon Medved’s personal tweets here. 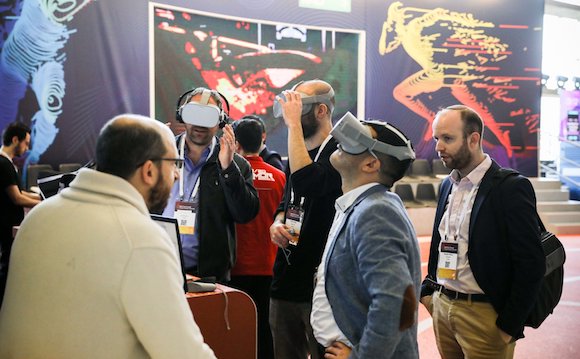