In case you’d missed it due to that cave you’re living in, we’re driving towards the post-Covid era of ‘new normal’ where the old way of life and the traditional way of things no longer happens the way that it used to.

Application platform company OutSystems used its NextStep 2020 (virtual online) conference to break another one of our notions of the traditional.

Already established since 2001, OutSystems has been providing software tools at various levels for some two decades now… but now (the company claims) it can offer a platform that provides a real workable alternative to ‘traditional’ software application development and coding techniques, methodologies and practices.

The company’s latest tools were presented this week to (despite its online status) what the firm says was its largest ever gathering of developers and IT professionals.

Originally from Lisbon, OutSystems CEO and founder Paulo Rosado has spoken forthrightly about how his company’s vision to change the way software is built.

But, he says, although the power of software has never been greater, IT departments struggle with expanding application backlogs and strain to keep up with an onslaught of new technologies.

“Building and changing applications at speed and scale continues to be a painfully complex process for most organisations. Traditional technology stacks are getting more complex, atomised and challenging to implement while traditional development remains overly manual, disconnected and rigid,” said Rosado.

Explaining how his firm’s platform has moved forward with its 2020 functionality releases, Rosado points his firm’s collaboration tools and release of Builders, its flagship development environment for the OutSystems platform.

Within this technology group, OutSystems Service Studio is designed to enable professional developers to assemble applications either from scratch or from components assembled by domain experts using specialised tools called OutSystems Builders.

“These visual toolsets are optimised for particular aspects of the development cycle as well as for team collaboration. All Builder output integrates with the efforts of professional developers working in Service Studio. This enables teams to collaborate on applications with the expressiveness of traditional development, but with superior speed and efficiency,” said the company, in a press statement.

Looking at the actual products, Workflow Builder enables the visual mapping of complex business processes and the automated creation of workflow-based applications. Experience Builder enables developers to prototype mobile applications that use common patterns and flows. Integration Builder reduces the complexity of extending the existing systems on which businesses depend (like SAP and Salesforce) ensuring integrations are fast, secure and scalable.

Also here we find AI Assist. OutSystems says it has fused Artificial Intelligence (AI) into its platform to automate, guide and validate development throughout the application lifecycle. It is designed to aid all skill levels, from professional developers to business analysts.

“Pure no code/low code solutions are easy to use but lack capability, while traditional development is powerful but lacks ease of use and agility,” said Rosado. “OutSystems delivers the best of both worlds: high-productivity tools that automate and simplify complexity, with the power and expressiveness of traditional development. This approach radically transforms the way our customers build, deploy, and most importantly, evolve their critical applications.”

Deeper into the functions on offer here, OutSystems Architecture Dashboard is ‘infused with AI’ to visualise and enforce complex cross-portfolio architectures built with OutSystems and identify issues early in the development lifecycle. Architecture dashboard ensures that applications are secure, performant, and resilient and that teams are able to avoid costly design errors as well as duplication of effort.

With the new OutSystems Machine Learning Builder, developers can create custom AI applications with personalised experiences. For example, machine learning can be used to analyse the behaviour of customers to improve a chatbot experience by eliminating options they don’t like or automatically routing their questions to the right department. Machine Learning Builder shows how OutSystems is able to quickly introduce new technologies into its platform and make those technologies accessible to developers.

Arguably the most interesting products on offer here were TrueChange and OutSystems Machine Learning Builder, given the Computer Weekly Developer Network’s 2020 focus on AI tools for developers i.e. not just for users, this is stuff for working programming practitioners. Why do these companies talk about the best stuff right at the end eh? Luckily, we’re drilling into the functions that OutSystems supplies as AI for coders as a separate story, watch this space. 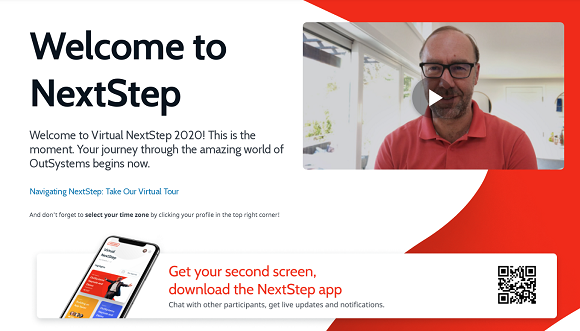