The first Connection, aimed at developers building Shopify e-commerce apps, is generally available now, with more to be added in the coming months. Shopify is deployed in online stores and at retail Point of Sale (PoS) systems to handle services including payments, marketing, shipping and customer engagement.

US-centric but with global reach, Shopify is growing its partner ecosystem revenue in figures that amount to billions, annually… but (suggests Gadget) as more brands expand online, businesses are increasingly finding that they can no longer rely on out-of-the-box functionality from e-commerce providers like Shopify.

“With Connections, developers can now skip the laborious task of building their own integrations to ecommerce APIs. Rather than getting bogged down with weeks of menial, boilerplate work, Gadget developers can instantly connect to any of the 1.7 million Shopify stores, without any code,” said Harry Brundage, co-founder and CEO of Gadget.

Building e-commerce software presents a special set of challenges that needs to be navigated carefully.

In addition to the myriad of technologies and APIs required to build a good app, developers also need to take e-commerce-specific challenges into account, such as performance and scalability, data storage requirements and additional security concerns that come into effect when handling financial transactions.

“Using Gadget Connections is at least 4-5x faster than setting up an app manually. Time that would normally go into making the project performant, secure and scalable is saved,” said Simon Barnes, technical director and partner at Made and Bound, an advertising and commerce partner for ‘challenger’ brands.

Gadget is designed for scale, allowing developers to go live with their applications and handle what is claimed to be “any volume of data” from day one. 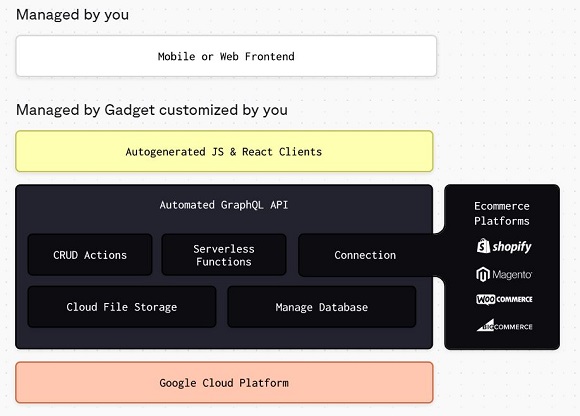