A belated happy new year to all WITsend readers – I hope the January blues are over now we’ve reached February!

Every year we say “a new year, a new start!” And in this case: “a new decade, a new start”. Let’s hope that’s the case when it comes to the dreaded gender pay gap. But results from a survey by silicon.com indicate that instead of the situation improving, the difference between the pay of men and women in IT is getting bigger.

Just take a look at this graph – the results are quite striking: 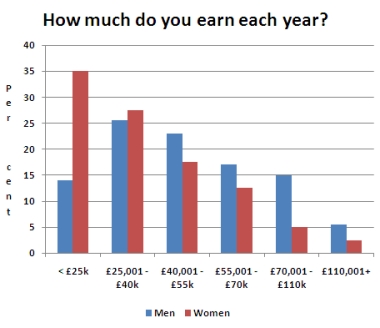 When it came to bonuses, although more women than men took home extra cash in 2009, men received higher amounts. 65% of women who received bonuses got less than £5000 compared to 47% of men and 10% of the males had bonuses of over £20,001, whereas the number of women receiving that reward was: zero.

It always comes back to the same question: why? The main answer seems to be that many women put their career progression on hold due to family commitments, leaving the top jobs open for the men. The huge difference between maternity and paternity leave allowances doesn’t help this situation either (although that looks like it may change). But it’s not just the women that are missing out here – businesses need the input of women, especially at senior level.

Remote working, schemes to help women back into work after maternity leave, mentoring – these are all practices businesses should be looking at so that we can change the look of the graph above and have more women at the top of IT. As I said before, it’s a new decade – let’s hope it signals a new start!