EU justice commissioner, Viviane Reding, has challenged publicly listed companies in Europe to sign a pledge, titled, ‘Women on the Board Pledge for Europe’ by March 2012.

Viviane Reding says, “The Commission will assess whether there is significant progress and whether credible self-regulatory initiatives were developed to enhance women’s participation in decision-making. If this has happened by March 2012, I will congratulate the European business world. If it has not happened, you can count on my regulatory creativity.”

There’s been a bit of debate about introducing quotas after Lord Davies’s report – whether voluntary or legislative – as it could undermine women’s achievements and success, reducing promotions to simply making up percentages.

Maybe getting 30-40% of women to the top tables is the first step. Perhaps it’ll be easier to judge on an individal rather than a gender-influenced basis once we reset the balance?

Companies can fill out the form below by visiting the EC website. 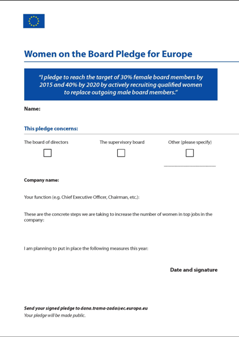