Latest Blog Posts
Related Content
BlogRoll
Latest News
Download Computer Weekly
In David Kirkpatrick’s book The Facebook Effect, Mark Zuckerberg mentions several times that he believes it is now only possible to have one identity. By identity he means the impression others get of you – it used to be easy to have a work identity, a college identity, and a friends and family identity.
With social networks those different social groups all get blurred.
Zuckerberg’s comments were widely criticized. Privacy campaigners declared that the evil Mr Facebook was just extending his empire and we should all really switch off our connections to the online matrix.
Forget the privacy implications for a moment. Wasn’t Zuckerberg right about the blurring boundaries?
Many people now try to employ a crude boundary of sorts to their online interactions. Facebook is for friends and family. LinkedIn is for business and networking. Twitter is for online chatter and news sharing.
But even those boundaries can blur. People talk about their new job on Facebook or chatter about music on Twitter and allow it to be fed automatically to their LinkedIn profile. It’s hard to maintain multiple identities that never bleed into each other.
We now live in an environment where our personal lives blend and mix with our business life and those environments cross over and merge in many ways.
So I was interested today when I saw the online LinkedIn status of New Media advisor Ed Stivala, the founder of n3w media.
“It constantly amazes me how many people feed their Tweets directly into the their LinkedIn / Facebook status updates. Many of them should know better too!! It is such a basic schoolboy error.” 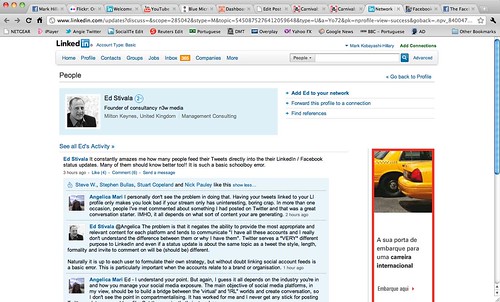 Is it really a schoolboy error to think that your information on one social network might be of interest to those reading another?
I noticed that Angelica Mari from Computer Weekly had already started a dialogue about this status update. Her first comment focused on the pretty obvious fact that if you are writing anything of interest on Twitter then it would be interesting for it to be streamed to your LinkedIn profile.
Nothing too controversial there.
Then Ed comments that linking different social feeds is a basic error, he even says “I have all these accounts and I really don’t understand the difference between them or why I have them.”
A guru and advisor on social media all confused because there is just too much darn information around these days?
I added my own comment to the debate:
“Ed, I can’t quite see what you are talking about. You seem to be talking about different channels to market, different communication strategies, and different tools as if there is a “twitter me”, a “facebook me”, a “linked in me”… Basically I am me and it doesn’t matter if I am communicating on Linked In or Twitter. My Twitter feeds directly to my Linked In because my (mostly) business viewers on LinkedIn then get the latest info on what I am doing at present. If that means that Linked In viewers see my opinions on what is happening in Wisconsin, or Tesco, then that gives them a better understanding of who I am… I don’t believe at all in this idea of a business OR personal channel.”
This debate rattled on with some others offering comment, but then something interesting happened. Angelica added a comment saying that the only difference between social networking and business networking is your perception of the platforms used – even an update about where someone is eating lunch could be of interest. It all depends on the situation and the person.
Ed deleted the comment.
Then, I went back to have a look at the debate again and I found that Ed had also deleted MY comment.
Angelica noticed that her earlier comment was deleted and she had written a further comment asking how on earth deleting debate contributions on LinkedIn helps us to talk about the topic in question.
Ed deleted that comment too. 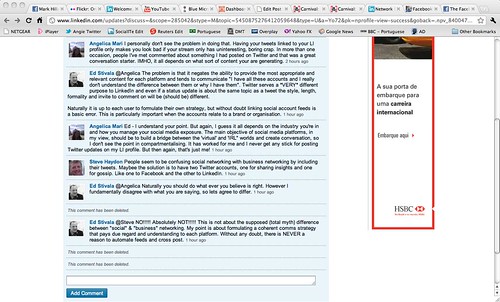 Clearly Ed from n3w media (note the substituted numeric and lower case) believes that it’s fine to carry on a debate on LinkedIn provided everyone agrees with him.
Or perhaps he was embarrassed to see dissenting voices criticizing him on his own LinkedIn profile because his clients might see it and ask him how a ‘supposed’ new media advisor would sanction the deleting of other people’s comments on LinkedIn.
I can understand that Ed has his views and opinions. I’m happy to respect those. I pitched in to an open debate with my own comments and I’d be glad to openly debate why he thinks I am wrong.
But I never expected Ed to just delete my comment. I never expected Ed to not even acknowledge that I took the time and trouble to offer my views. I never expected Ed to just erase my views from history in an extremely good impression of Orwell’s Winston Smith.
Perhaps Ed learned his new media advisory skills from a long illustrious career working in public relations in China? I’d be delighted to hear from Ed to explain his actions, but I would be even more interested to hear from a client of n3w media.
Is this really the kind of advice you pay for?
SearchCIO
SearchSecurity
SearchNetworking
SearchDataCenter
SearchDataManagement
Close