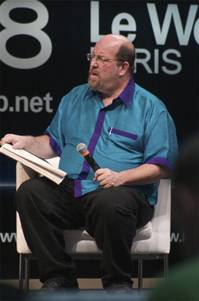 Marc Canter (who didn’t, in fact, perish yesterday) lead an entertainingly scrappy session on open standards around social information. He started by giving Facebook’s senior platform manager Dave Morin a hard time about Facebook apps. Has the social network pushed apps back with the recent revamp of the site?

Morin responded that there were always multiple integration points for apps, and the most important was the profile box, but that didn’t always give a good user experience. The news feed has become very popular, and that’s become their focus. Users can display most recent actions. Devs can user it to get engagement.

Canter riposted quickly: “The feed is the epitome of your locked in strategy.”

Dave Recordon, the open platforms tech lead from Six Apart joined in the criticism: “Open platforms have been more successful, historically,” he argued. Even if Facebook is currently the shiney place, if developers can write and application once and put it loads of places, Facebook will be marginalised.

MySpace has taken the opposite route, argued Max Engel, head of data availability initiative at MySpace. They’re building using open standards because the “internet routes around roadblocks and we want to be part of the flow”. MySpace users already thing of themselves as Myspace.com/profile, so we’re in a great place to bring thsi forward. “We’ve now implemented everything on the open stack.” The stack is a group of technologies which enable open social platforms. Canter gave us this slide of it:

For example, OpenID is a profile web address that you can use to login to any site that supports it. OpenSocial solves the desire to use any app on any site on the web, with the same people relationships and profile data you have elsewhere. Apps written for this standard run in any site that support Open Social container. David Glazer, director of engineering at Google, explained that all of these technologies are needed to create a good user experience.

And surprisingly, Microsoft is claiming to be an OAuth leader using the delegated sign-in system. And Jeff Hansen, general manager services strategy/Livemesh talked about the firm’s move towards openness, inclusing the ability to pull your profile and friends data out of Microsoft services, edit it, and push back in. It’s a two way API – genuine portable contacts.

However, Canter raised the spectre of Twitter, a hugely popular, data-locked service. “We’re all putting our balls in Ev Williams’ vice,” as he colourfully put it.

Hansen’s attempts to defend the less open parts of LiveMesh were met with a derisory “different ways to plug my balls into your vice” from Canter.

He then rounded on Glazer. “What’s good for the open web is good for Google,” says Canter. “Every company here has their own agenda, but we always have to keep the users in mind.”

Gmail has data lock in, he argued. “If you don’t want to be open – you’re not open,” he said. The response form Glazer, backed from some of the others, was that you probably don’t want your e-mail to be shared…

Morin launched into a fairly hopeless attempt to boost Facebook Connect as an open platform. “Facebook allowed people to control information and share more than ever before,” he said. “Now you can take privacy settings with you wherever you go.”

Recordon skewered that one quicky: “We were doing that on Livejournal years ago,” he pointed out. “Why are you giving Microsoft access to the e-mail addresses without my permission?”

Glazer offered the rather weak defence that Microsoft doesn’t keep the e-mails. And questioning from the floor was just as hostile. Mike Arrington of Techcrunch stated forcibly that Facebook is not interested in open software stack and that Canter should call bullshit on its claims. And Tom Morris challenged Microsoft’s commitment to open standards after the OpenXML affair.

Robin Good's Latest News - 1 Jan 2009 2:37 PM
New Media Predictions 2009: What Online Independent Publishers Should Expect From The Future - Part 2 Here is Part 2 of my New Media Trends and Predictions for 2009. In this report I look at major trends while I try to anticipate key changes and the type of innovation taking place around the world of new...