Yesterday the world watched as the first British cyclist for 100 years won the most gruelling cycling race in the world. 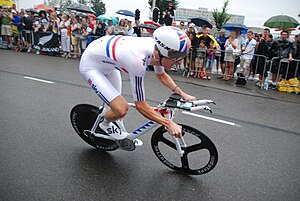 Hundreds of thousands of supporters tuned in for the final leg of the Tour de France which saw Bradley Wiggins take first place and cycling become the most talked about sport of the day – even with the Olympics around the corner.

As someone who doesn’t even enjoy cycling, even I managed to get caught up in the buzz around Wiggins and felt the pang of joy for him when I saw the rider cross the line during my Sunday lunch at the local.

But, as with the games, the task of bringing the excitement of the event to all of the viewers took précis technology behind the scenes.

Xirrus was responsible for the Wi-Fi networking to keep 125 TV broadcasters, 2,300 journalists, 70 radio stations and 450 newspapers connected and able to share all the news, statistics and footage of the event with the spectators.

It also connected up all of the organisers for the event, ensuring operations ran smoothly across all 21 stages of the event.

It’s hard to believe it needed only five Xirrus Rapid Deployment Kits and it only took two employees two hours to set up at each site.

But, even with a select back-end, it ran very smoothly, enabling even the most cynical back home to enjoy the competition.

Now, here is hoping the companies involved in the Olympic Games mange to pull this off just as well.