Nokia is often treated as the sad, old mobile manufacturer that lost its way. The phone in the corner trying to shout “I used to be a contender!” over the noise of the cooler kids like Samsung and Apple at the smartphone party. 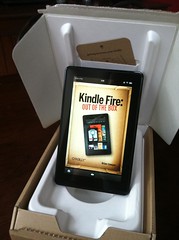 Kindle Fire: Out of the Box (Photo credit: Brian Sawyer)

The tie-up with Microsoft didn’t exactly do it any favours either, as although Windows Phone is a shiny, modern operating system, Microsoft is the granddaddy of software to Nokia’s grandmother of mobile engineering.

But today I hope Elop and his gang stood up and shoved a rude gesture in the face of the Silicon Valley sweethearts when Amazon announced it wasn’t going Google for maps on its Kindle Fire tablet, but plumping for Nokia’s own Oyj service.

Ok, it is only maps, it is not the be all and end all of mobile technology. But, the Amazon Kindle has now sold out in the US – sparking rumours of an updated version to be announced at a press event next week – and IDC claims it accounts for 22% of the tablet market in the US after less than a year on sale.

With the Amazon app store opening in Europe this week as well, it looks like the tablet which sells for just $199 in the US could be coming to our shores soon.

The fact that it has chosen to partner with Nokia should not only boost the company’s self-esteem but maybe show the wider world there is some worthwhile innovation to come from the Finnish firm yet.

Let’s just hope the Windows Phone 8 devices, also due to be announced by Nokia and Microsoft next week, continue to shake off this legacy reputation and make the European representative a force to be reckoned with in the smartphone wars.