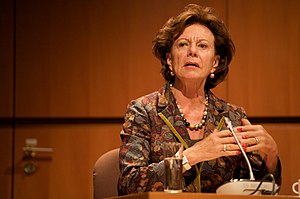 There has been a lot of speculation in the past week around plans championed by Neelie Kroes to scrap roaming charges throughout Europe.

A report in Reuters claimed the draft proposal of the single European market for telecoms had dropped the controversial clause that would see the cost for citizens using their mobiles abroad plummet by up to 90% and eventually become non-existent.

This led to hushed questions being raised about Kroes’ leadership and whether she could convince operators round to her way of thinking or whether the big boys in the mobile space would win the battle.

Today at the GSMA’s Mobile360 event in Brussels though, the Kroes we know and love took to the stage and made it very clear she would win the war.

Her tone of voice showed she knew everyone in the room had read the Reuters article and were questioning her metal, so she put them in their place.

“We [want] new consumer choices to make roaming charges in Europe a thing of the past… [and] this is what I am talking to telcoms operators [about],” she stated.

“We are talking about getting rid of roaming and, by the way they are agreeing, I can assure you. That for me has absolutely cemented making it possible for new business models [to] be developed.”

By the end of her speech I felt a little like we had all been told off and Kroes knows best. But, as the woman in Brussels pushing the Digital Agenda, she can talk like that anytime she likes if she is going to get the job done.