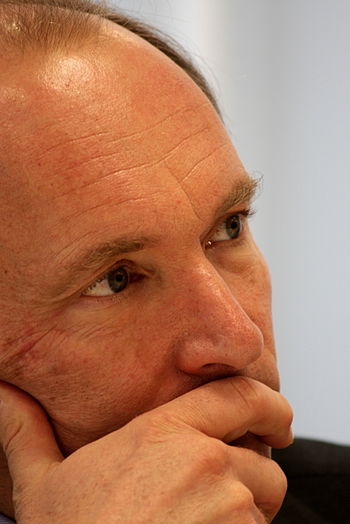 Closeup of a thoughtful Tim Berners-Lee at the data.gov.uk launch. (Photo credit: Wikipedia)

On only my second day at Computer Weekly, scoring a front-row seat to watch one of my all-time heroes, Tim Berners-Lee speak isn’t too shabby.

I was lucky enough to spend a couple of hours this week at the Southbank Centre in Sir Tim’s company for an illuminating event on the future of the worldwide web. Among the topics up for discussion were idea that how concerted mass action is needed to maintain the free and open ideals of the worldwide web, and protect it from powerful interests that want to control it to often nefarious ends.

You can read my report on Tim’s thoughts on web openness and his hope for an online bill of rights right here.

The Southbank Centre drew together an audience made up of web experts, technical masterminds, representatives of the arts world, journalists, politicians and local schoolchildren to share their thoughts and pose their questions to Tim at an anything goes ‘think in’ designed to help set the agenda for the Web We Want festival, which is being held at the Southbank Centre later this year.

The subsequent roundtable discussions were held under Chatham House rules, which means I’m honour bound not to tell you who was speaking or what, precisely they said, however, I spent a little time with some representatives from the world of theatre and some of their concerns were very interesting indeed.

One of the participants, who works for a well-known London theatre company, expressed his frustration at his inability to collaborate effectively with other bodies and institutions around the world, simply because the underlying network was not up to scratch, or because he simply did not know how to use it to its full advantage.

Another participant threw up the idea of an artist in a remote part of the country, who may be making truly remarkable, beautiful works, but cannot share them with the world because the BDUK scheme has not yet provided fibre connectivity to his or her home.

The arts can be a disruptive medium, at least as disruptive as, and potentially more so, than the worldwide web has been in its 25 year life. Just think of era-defining artists like Vincent Van Gogh, or revolutionary composers like Igor Stravinsky, whose Rite of Spring is said to have caused a near riot at its premiere in 1913.

Art inspires. Art delights and enrages. Art topples governments and changes societies. Can anybody seriously make the case that the worldwide web has not done exactly the same? The parallels are clear to me, and coming away from the Southbank Centre’s event, I now believe we have a clear responsibility to foster greater collaboration between our corner of the industry and the arts. In a symbiotic, collaborative relationship, both sides can realise their far greater potential.