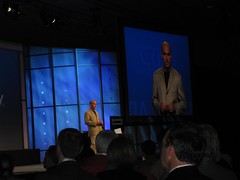 It has been just over a year since Jim Balsillie step down from his role as co-chief executive officer at RIM.

In that time, the company continued to watch its reputation and market position spiral downwards, with sales dwindling and a previously loyal fan base starting to switch allegiances to the new leaders of the pack, Apple and Android.

Through all this, Balsillie appeared not to have given up on his old firm though. Despite not being as visible as his former co-CEO, Mike Lazaridis, who stayed on the board of directors, Balsillie did keep his 5.1% stake in the company, equating to 27 million shares.

Then last month RIM became BlackBerry, the firm unleashed a new handset on the market and it totally revamped its operating system to become BlackBerry 10.

Early reactions from the industry and users alike was positive, the company executives had smiles on their faces like they hadn’t for months – if not years – and BlackBerry was heading into 2013 ready and waiting for a comeback.

So now Balsillie has decided it is time to jump ship and throw those stocks in the ocean.

In fairness, the positive reaction to BB10 and the Z10 handset did seem to settle the waters over at BlackBerry a bit and saw share prices returning to a steady $15 after plummeting as low $6.25 in October last year, perhaps meaning now would be a good time to sell.

However, when you are the second largest stakeholder in a company like Balsillie was up until recently, if you chose to throw your stock away, it sends out a quite scary message to other investors of get out now and run for the hills!

Some have suggested Balsillie just wanted to throw one last nasty gesture at his ex-employer and make a dramatic exit. Some believe he finally wanted to move on with his future and leave the past behind him.

But what remains to be seen is the affect that his stock departure will have on confidence in the new BlackBerry and whether we will be praising his lucky escape or patting him sympathetically on the shoulder in a year’s time.

We have a feeling it might be the latter…

UPDATE: I have just discovered he made the sale before the BB10 launch in January. Seems Balsillie didn’t have faith in the upcoming product bringing him in any extra dollars.

My original conclusion remains, however. Now the departure is public and apparently showing a massive lack of faith in the new product line, will it damage BlackBerry’s reputation with it’s other investors? Or has Balsillie made a bad judgement call? I would love to hear what you think.