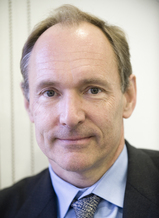 What if you weren’t using the Web to read this blog post? What if you were using the Mesh? That’s not as outlandish as it might sound: the father of the World Wide Web, Sir Tim Berners-Lee, considered calling his invention ‘the Mesh’ and only ruled the name out because it “sounds like a bit of a mess”.

That’s something I found out last night when I attended a talk by Sir Tim at the Science Museum, here in London. The talk was part of the museum’s centenary celebrations – and it’s birthday cake all round because while the Science Museum is 100, the Internet has recently turned 40. The Web, meanwhile, is not quite out of its teens.

Some other snippets from the talk:

The slides from Sir Tim’s talk are available on the W3C website.