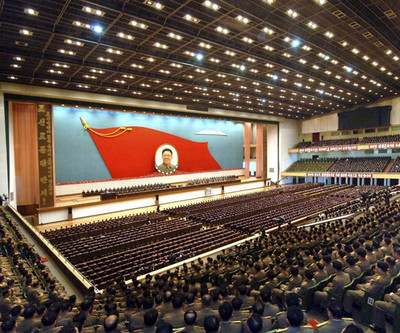 Parliament is still treating Linux users as though they aren’t citizens. It’s website, for them, is like the door of an exclusive Soho gentleman’s club.

If you aint got Microsoft, you aint getting in – though we might give you a second chance if you go home and change that boho suit.

Video broadcasts of Parliamentary proceedings are designed to be watched by people with Microsoft software.

The Parliamentary ICT Office had been trying to solve the problem as part of its attempt to turn parliamentary video recordings into a public asset anyone could incorporate into their own websites. But it still gives precedence to people using Microsoft software, after more than seven years.

If a Microsoft user pitches up to Parliamentlive.tv without the required Microsoft Silverlight media player installed on their computer, they get a page with a button that will install it conveniently. Linux users just get fobbed off.

Parliament’s error page tells Linux users they must go elsewhere to install alternative software before they can watch its broadcasts. 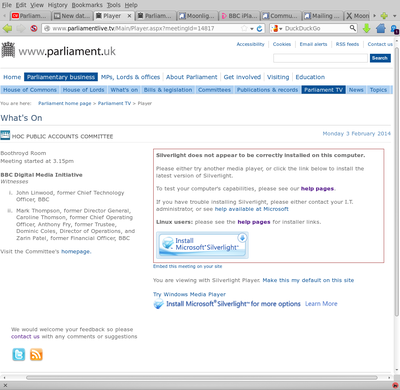 Aside from being titteringly untrue, the software it is not possible to install on this page has for years been difficult, if not impossible to install for any Linux user who doesn’t also happen to be a computer expert or at least have a lot more patience than parliament expects of anyone who is prepared to pay a premium for Microsoft’s monopoly software platform.

One day, says Parliamentlive.tv, Linux users might be able to get an up-to-date stable version of  software they can use to watch its proceedings. If ever in the future parliament’s contacts with the electorate through internet video were to converge with teleconferencing technology, a la Star Trek, anyone with Microsoft software would have a democratic advantage. Public debates would be full of Microsoft twerps. Linux users would be left outside in the straw.

The link to the promised stable version seems fruitless anyway. It takes you to another page, on the website of a Linux technology called Mono, that says in language comprehensible only to computer experts, you can’t install Moonlight there at all, but you should be able to get it elsewhere using standard Linux software repositories:

“The Mono project does not provide binary downloads for Moonlight; however, packages for most Linux distributions can be found online, either in official distro package repositories, or provided by popular third-party repositories.”

Aside from being unhelpful gobbledygook, this statement also appears to be untrue. The Moonlight player appears not to be available even to those users confident enough under the bonnet of their computer to search software repositories.

The public debate our Linux user had gone to view at the Parliament website has meanwhile passed, and there may be nobody other than Microsoft users who witnessed it.

A search for help on this matter goes round in circles. Documentation for the popular Ubuntu Linux operating software (dated 2010) says users should install Moonlight by going to the Mono website. But that directs users to the same page-to-nowhere we’ve already been to.

Elsewhere you might see mention of a Moonlight plug-in for Firefox. But the Firefox plug-in library contains no mention of it.

This might be a familiar pattern for any potty-trained Linux user who has attempted to watch a parliamentary proceeding at any time in the last seven years. Why does Parliament still treat Linux users like second class citizens?

It might be said the blame lays with Linux for having a software ecosystem often only navigable by computer experts. But standard Linux software has long since installed at the click-of-a-button. And the problem only usually arises when you try to play media formats created by companies like Microsoft, that have long used their formats as a form of extortion, to make sure you have to buy their software platform in order to play it.

Microsoft-platform formats like Ape and Microsoft formats like Windows Media Player, effectively obstruct anyone who doesn’t pay up to Microsoft.

The blame therefore lays with Parliament for not choosing to broadcast its proceedings in a standard of communication that is open to anyone.

What on earth is Microsoft trying to do in domineering protocols of communication anyway? What sort of tyrannical pursuit is that?

Silverlight is what Kim Jong-un would do if North Korea was a software corporation.

Near anywhere else Linux users go to watch video online, they don’t have to bat an eye-lid – the video just plays. Even the BBC’s own live video broadcast from Parliament plays instantly, without a hitch.

The BBC’s live parliament broadcast only shows one channel though. And yesterday, when your correspondent had a job to do, that was not showing the committee debate that happened to be high on the public ICT agenda.

That was, ironically, a Public Accounts Committee hearing about the failings of the BBC’s own ambitious attempt to digitize its television programming. The BBC was showing instead a debate about the Ministry of Defence.

And MPs on the committee are still mithering about the cost of pioneering software developments like the BBC’s Digital Media Initiative. Yet they can’t even get the simplest software right themselves.

To be fair to the committee, its own Pa rliament’s undemocratic video broadcasts were themselves pioneering in their time. Parliament attempted to do something that hadn’t been done before. It did it quite well. But it made some decisions that in hindsight it really got wrong. That’s the risk and inevitability: some bits of a pioneering software project simply won’t work out.

It does look now that there may be a way round this Microsoft Video problem for Linux users. It is not obvious, there’s no mention on if in the help pages, and there’s no button you can press on Parliament’s website, but it may be that a Linux user searching for a solution to this problem might come across something called the Mono libraries. And if they have the requisite computer skills they might install these libraries and they might – might – find that if this does not give them software to play the British Parliament’s Microsoft(tm) broadcasts, it might at least give them the means to install Moonlight if they can find it elsewhere.

That’s what Parliamentlive.tv says to Linux users, thanks to Two Four and Microsoft. If you run Microsoft Windows, it says, click here to install Silverlight. If you run Linux, you’re on your own.

That raises a funny question for Parliament’s own failed attempt at pioneering video broadcasts, aside from why on earth it ever chose a proprietary Microsoft software format in the first place. That is, what exactly has failed? What software has Parliament got to scrap in order to rectify its mistake?

Parliament can’t ban Linux. It can’t decree that everyone uses Microsoft – though Microsoft’s longstanding monopoly and its supporters in places like Parliament effectively force people to use Microsoft. It can’t simply turn off its video broadcasts. It might be more democratic to turn them off. But there’s no going back.

Isn’t it therefore simply about time Parliament scrapped Microsoft Silverlight, wrote off its years of investment in Microsoft as an expensive mistake, and then held a meeting of the Public Accounts Committee, in a Linux-compatible format, about how it came to waste all that money in the first place?