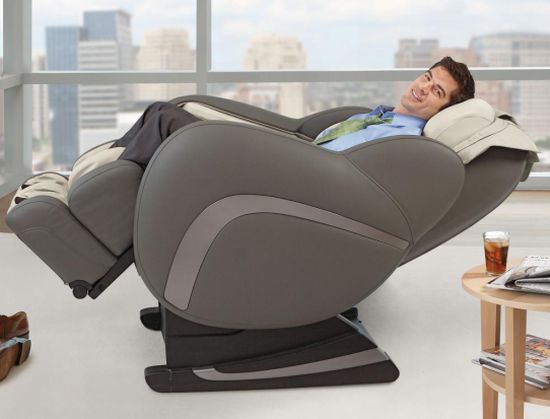 While prosecutors in Europe and the US struggled to restrain Microsoft’s monopoly in the late 90s, their own compadres in the European Commission’s Information Directorate demonstrated in gobsmacking style just what little difference they were making, even in their own back yard.

Within six months of both the US Department of Justice and the European Commission competition directorate making landmark anti-trust moves against Microsoft’s monopoly in late 1998, the the EC Information Directorate (DIGIT) had moved to entrench and extend Microsoft’s monopoly over its own computing infrastructure.

DIGIT was sticking Microsoft everywhere. And it no longer had to justify doing it without a competition – as it might when, say, buying comfy chairs.

The EC had found a particular brand of chair was especially comfortable, thank you very much. Why should it bother telling other chair suppliers when it was about to spend a few more millions of Euros on chairs, when it had no intention of giving them a chance to compete for the business?

Because the procurement rules said they should. And DIGIT’s excuses for doing backroom deals with Microsoft were starting to sound a bit lame.

This was a nice arrangement. It meant that for the first time in nearly a decade of buying Microsoft, the EC would have a fair and open competition to determine who got to supply the software that ran its PC infrastructure and tooled up its officials.

There was just one snag, though. Microsoft had the market for Microsoft resellers tied up. So it could set the terms by which the EC did business with them. And it did.

So the EC found that after it had gone through all the cost and effort to run a public competition for a Microsoft reseller, it still had to do a backroom deal with Microsoft: to agree the prices and terms by which the Microsoft reseller would do business with the EC. It made the competition look like a bit of a sham.

“Microsoft offers different types of agreements under which price reductions and maintenance delivered by the resellers can be obtained,” explained the EC report that claimed to justify doing another backroom deal with Microsoft.

“The reseller applies his margin on the retail price negotiated between the Commission and Microsoft,” it said. These were Microsoft’s procurement rules. 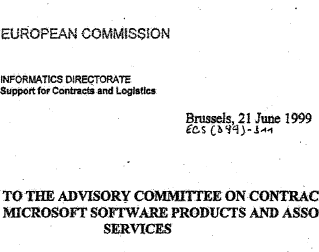 The paperwork was more of a formality than usual. DIGIT made its Report to the Advisory Committee on Contracts Concerning Microsoft Software Products and Associated Services on 21 June – just nine days before the last Microsoft licensing agreement ran out.

There wasn’t much bother about it all. The EC could only really gift its business to Microsoft after prospecting the market to ensure it really had no alternative. There would be no point running a competition for a software supplier if Microsoft was the only game in town.

As it happened, Microsoft did have a monopoly. It was therefore, to all effect, the only game in town.

It had in fact 95 per cent of the operating system market. It had a similar share of the market for office software. It was using its monopolies to extend into other areas of software like the internet, which had earned it a wrap on the knuckles from the US department for Justice just six months before. And it it was extending its monopoly into servers, a situation that the EC competition police were investigating at that very moment after complaints in 1998 from Microsoft rival Sun Microsystems. Microsoft wasn’t really the only game in town. That’s just how it seemed to procurement officers, and the market.

So DIGIT’s market survey came up trumps for Microsoft:

“The Microsoft range of products and services used by the Commission is only available from Microsoft,” it said.

“It is not possible to acquire similar products at the same level of quality from other suppliers,” it said.

That was all it said. It was the usual justification for doing a backroom deal with Microsoft: only Microsoft could supply Microsoft.