A senior member of a leading British tech standards body has launched an excoriating attack on Cabinet Office efforts to implement the central plank of its ICT Strategy.

The outburst has opened a crack into the secretive world of formal tech standards, suggesting it may be convulsed in a fit of pique not seen since Microsoft got its derided OOXML document format passed by standards bodies around the world in 2008.

Alex Brown, British Standards Institute committee member infamous for overseeing OOXML’s approval, said in his personal blog how he had become exasperated with government efforts to bring ICT standards in line with its policy of easy interoperability of public computer systems. 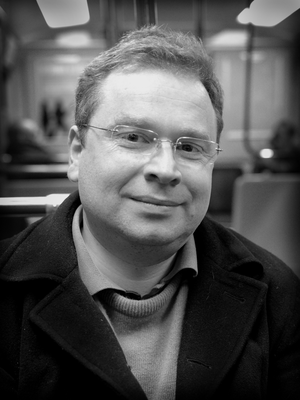 Cabinet Office had given formal standards wonks a “kick in the teeth” with its attempt to create an approved set of government ICT standards, said Brown.

A public survey of favoured ICT standards opened by Cabinet Office in February was technically “ignorant”, said the expert.

BSI standards bodies are so secret that members (who have typically invested a life’s career in such work) face the threat of excommunication if they talk about proceedings.

The whole episode has nevertheless shown how the British Standards Institute has been thrust into a corner by the current trend for transparency and the Cabinet Office’s apparent preference for crowd-sourcing standards from a church of people that may include the great unwashed.

The situation is said to have “gone toxic”, with Brown’s blue language drawing approval from at least some of his colleagues.

Garbage in, garbage out

The most offensive element of the Cabinet Office survey has been, it is said, its technical inferiority. It was stuffed with mistakes that – it is feared – may lead to useless survey results on which Cabinet Office will subsequently base its standards policy.

This has become a serious matter since the Cabinet Office ICT Strategy said it would “impose” standards across government.

This was a popular policy in a polity paralysed by proprietary technologies: the UK is setting an example, and Cabinet Office decisions on standards will have ramifications perhaps big enough even to change the landscape of the IT industry. Yet the Cabinet Office has raised questions about its technical authority with its first move. 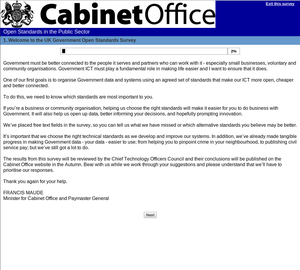 Many of its mistakes are in the field of document standards in which Brown’s IST/41 committee operates.

They include the repeated presentation of proprietary Microsoft document formats as options for formal government standards, despite government strategy being shaped by the icy grip proprietary formats have on the public purse.

The ICT strategy had already raised doubts about the Cabinet Office’s commitment to open standards.

It had in February published a Public Procurement Policy Note declaring the public sector should use open standards.

Gerry Gavigan, who represents the Open Source Consortium on IST/41, pointed out that only a month later the ICT Strategy had downgraded the requirement to “common standards”.

Conservative pragmatism has infected the coalition ICT Strategy with the belief that it would be impractical to impose open standards where industry already makes common use of de facto formats. The ICT Strategy nevertheless promised to make mandation of an open document format the first of its formal declarations. 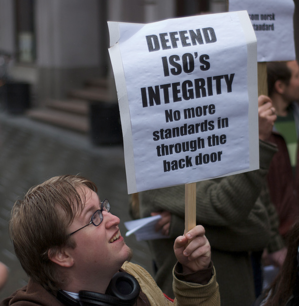 This open / common dichotomy and the BSI’s apparent ancillary part in it, point to the the bigger story behind Brown’s blog.

That is the existential threat the Cabinet Office reforms may pose for the British Standards Institute itself, and the secretive, formal standard setting process that runs right up to the International Standards Organisation in Geneva.

“What’s the point” of putting your heart and soul into a formal standards process when it can be undermined by an ill-thought-out public consultation, said Brown’s blog.

The failure and, it was alleged at the time, susceptibility of that process to corruption may have been demonstrated by the OOXML affair.

The alleged corruption was never confirmed, to this correspondent’s knowledge. But it has for more substantial reasons left the process with a stigmata that goes right to the heart of government policy.

The culture of transparency that has swept along in the wake of Sir Tim Berners Lee’s open data initiative has in addition made the BSI look anachronistic.

The Cabinet Office’s failure to involve the standards body in its own consultation and policy formation now make it look like the BSI’s days are numbered. But the Cabinet Office’s own lack of transparency can make anyone look that way.

The Cabinet Office was, as usual, unavailable for comment.

Both bodies are ripe for an equal dose of transparency and openness.