There’s a lot of chatter right now over a subject that seems to be called the “consumerization of IT”. I leave the Z in, as I don’t think this is a real word in the Queen’s English.

The “consumerization of IT” is in fact a neologism (or a newly coined term if you prefer), to describe the current phenomenon that we see in technology circles; consumer usage of technology is impacting the way the business market adapts to change.

Let me put it more plainly.

This “phenomenon” (and I use the term with a sprinkle of tongue-in-cheek) also extends to the developer zone.

Attempting to reflect the communication channels popularised by social networking services including Twitter and Facebook, WANdisco has launched Subversion’s first-ever social coding environment as a new tool known inside uberSVN itself.

This is social networking for developers and WANdisco says that uberSVN is organised around development teams. 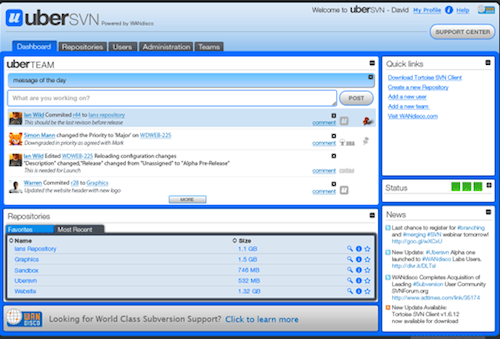 Each team has its own home page that profiles the team members, lists the projects they’re working on, repositories they’re using and their latest activity and status. Team members can then see each other’s real-time progress by subscribing to Twitter-like feeds.

WANdisco claims to have the highest number of active Subversion project developers on its staff. The company further claims that “thousands” of developers have downloaded its product and used it to combine their favourite open and closed source ALM applications into a single integrated platform with its repository and user management tools.

Seems like a good idea? Yes, I’d say so. This is a company that has come under fire from critics at various points for being quite ‘commercial’ in the Subversion space; but that is an open source knee-jerk that needs a bit of balance in my opinion. This looks like a good tool and one that developers will actually use.