The firm is known for its .NET user interface controls and also has Application Lifecycle Management (ALM) technology. 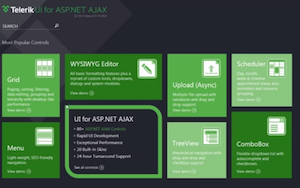 Open source news was focused on NativeScript and Telerik JustDecompile — the firm is also known for its Telerik Screen Builder product.

ScreenBuilder works to “bootstrap” applications by starting with “prewired” screens that can then be easily code edited in the AppBuilder too later to match exact requirements.

The firm insists that it has made its commitment to open source known with the release of Telerik Kendo UI Core framework.

In the same open source vein, the company now announces the availability of NativeScript, a JavaScript framework for developing native apps with JavaScript and CSS.

According to the PR machine, this release “fully rounds out” the company’s cross-platform solutions for any development approach — responsive web, hybrid or native.

In addition, the Telerik NativeScript framework team is collaborating with Google on early stage integrations around AngularJS 2.0.

Telerik also announced that it will open source the JustDecompile engine, its .NET assembly browsing and decompiling tool.

This software enables developers to take an existing compiled assembly (.dll or.exe) and browse the symbols it contains to decompile the assembly language back to readable C#, VB and IL.

As a self confessed Microsoft development tooling supporter, Telerik supports all new Microsoft releases, often before they’re made available to the general public — so here we find ASP.NET 5, MVC 6, Visual Studio 2015, C# 6, Roslyn, the Edge browser, Office 365 (and more) all being supported by the complete Telerik DevCraft toolset.

“The fantastic Telerik Kendo UI framework enables developers to build fantastic looking web based Office add-ins. That is why we’ve opted to give members of our Office 365 Developer Program access to Kendo UI to better enable their development efforts, across the board,” he added.