With a heritage in document management and data intelligence, Abbyy has in recent years extends its (application and service) products to what it hopes is now viewed as a more fully-fledged platform play level.

As such, the company is now working to extend and finesse its work in areas like machine learning model (ML) development.

By bringing support for the Python programming language, Abbyy is the one of the most popular language for machine learning and AI.

A 2020 survey from CodinGame showed that Python tied with Java in RedMonk’s quarterly rankings and suggested that it is the “most loved” programming language.

As many readers will know, Python is widely used in all industries for tasks like automation, web development, scripting, web scraping and data analysis by companies like Google, Pinterest, Spotify, Dropbox etc.

Python is also commonly used in academia with students to learn programming, data science and machine learning. Its

With the added Python support, Abbyy hopes more developers and organisations will be able to utilise NeoML to build, train and deploy models for specific core ML tasks including:

“Open source is a powerful driver of technological innovation. We aim to support advancements in artificial intelligence by working together with the developer community to further grow and improve our open-source library,” commented Bruce Orcutt, senior vice president of product marketing at ABBYY.

“We invite all developers, data scientists and academia to use and contribute to NeoML on GitHub,” said said.

The speed improvements have made NeoML fast. It offers up to 10 times faster performance for classical algorithms and up to 30% faster neural network training and inference than the previous version.

NeoML is designed as a universal tool to process and analyse data in a variety of formats including text, image, video and others. Users can deploy models anywhere: in the cloud, on-premises, in the browser or on-device.

Its neural network models support over 100 layer types. The library is fully cross-platform – a single code base that can be run on all popular operating systems including Windows, Linux, macOS, iOS and Android – and optimized for both CPU and GPU processors. 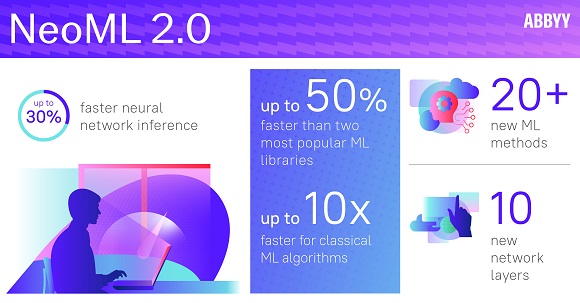