Google’s start it up, launch it with a blast and bash it about before you close it policy continues this week with a handful of services shutting down.

At the same time as these closures, Google has announced the open sourcing of the Sky Map application that uses GPS services to display constellations of the night sky to Android smartphone users.

Through a partnership with Carnegie Mellon University the service moves to open source and continues to aim to provide a “window on the sky” for Android phones.

According to Google code blog, this service was created by no more than half a dozen Googlers at the Pittsburgh office in their 20% (creative off-tangent project) time.

“The app was designed to show off the amazing capabilities of the sensors in the first generation Android phones. Mostly, however, we wrote it because we love astronomy. And, thanks to Android’s broad reach, we have managed to share this passion with over 20 million Android users as well as with our local community at events such as the Urban Sky Party,” says the company.

Google now hope for further development of Sky Map as a series of student projects.

The company, obviously, now hopes that other astronomy enthusiasts can take the code and augment it as they wish. 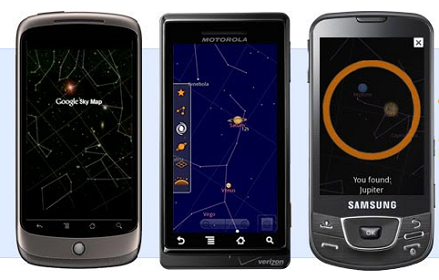