The open DuckDuckGo https://duckduckgo.com/ search engine has gained greater recognition this week as a result of the GNOME project selecting it as its default browser.

GNOME will drop Google as its default Internet search route as it now moves to DuckDuckGo.

DuckDuckGo does not collect (or share) its user’s information (unlike Google) and collates its search results from a compendium of crowdsourced resources including Wikipedia — it also partners with other search portals including Yandex, Yahoo!, Bing and WolframAlpha to produce its results.

The development team behind DuckDuckGo explains its enhanced approach to privacy and says that all users are shown the same search information for any given search.

DuckDuckGo is available on the desktop and on Android on Apple iOS powered devices.

Claudio Saavedra of the GNOME project states that his team, as web developers, believe they need to align with user privacy goals.

“Using Google’s search engine by default is counterproductive to this effect, unfortunately.”

“I assume I don’t need to go into details on the many ways in which Google tracks what their users do. DuckDuckGo, on the other hand, does not collect or share personal information,” he added.

You can read Saavedra’s full justification and technical explanation at: 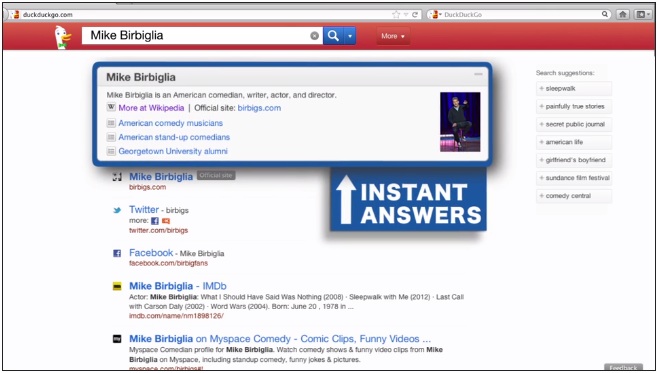