The GNOME open source desktop environment has reached version 3.0 Beta 1 (2.91.90) this week. The first of two Beta releases on the road to the release candidate due on the 23rd of March, with the final GNOME 3.0.0 release scheduled for the 6th of April.

Named according to the GNU Network Object Model Environment, the GNOME community website confirms that, “This release has got a quite a lot of updates including bugs fixes and user-visible improvements in GNOME Shell.”

In addition, the Network Manager elements (the networking wired/wireless management component) are also going through a lot of changes for the 0.9 release.

The community website issues the following warning, “This release is a snapshot of development code. Although it is buildable and usable, it is primarily intended for testing and hacking purposes. GNOME uses odd minor version numbers to indicate development status.”

In deployment, GNOME has been used for everything from the Baobab disk usage analyzer, to the Evince document viewer and a collection of calculators, games and the Epiphany web browser. 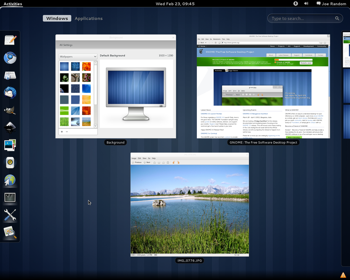