A New Hampshire based software application designer has produced a free font designed to provide “weight and gravity” to the letters it presents in order to solidify their position in readers’ minds.

According to Gonzalez, “OpenDyslexic is a new open sourced font created to increase readability for readers with dyslexia. The typefaces includes regular, bold, italic and bold-italic styles. It is being updated continually and improved based on input from dyslexic users. There are no restrictions on using OpenDyslexic outside of attribution.”

NOTE: http://www.dyslexiaaction.org.uk/ defines the condition as a learning difficulty that primarily affects the skills involved in accurate and fluent word reading and spelling – it occurs across the range of intellectual abilities. “Co-occurring difficulties may be seen in aspects of language, motor co-ordination, mental calculation, concentration and personal organisation,” says the organisation.

“Your brain can sometimes do funny things to letters.OpenDyslexic tries to help prevent some of these things from happening. Letters have heavy weighted bottoms to add a kind of “gravity” to each letter, helping to keep your brain from rotating them around in ways that can make them look like other letters. Consistently weighted bottoms can also help reinforce the line of text. The unique shapes of each letter can help prevent flipping and swapping,” explains Gonzalez.

Gonzalez’s font is free and can be downloaded from github and dafont. 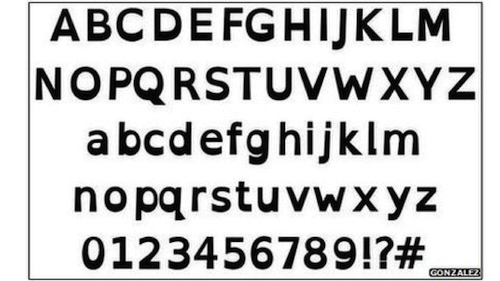 Instapaper has recently added OpenDyslexic to the list of fonts it supports. Instapaper is a free to subscribe web service that saves articles for later reading on web browsers, Apple iOS and Android devices and Amazon Kindle.

Gonzalez has told the BBC that he had seen this style of “heavy bottomed” font before, but that other examples were prohibitively expensive. His mission was to create an open source version that everyone could download and/or contribute to and augment over time.

Quoted on the BBC news website, Gonzalez has said that the user response has been great and that dyslexia sufferers have been able to read text without it “looking wiggly”.

So far, both Safari and Chrome extensions with an “off-white background” and “alternate paragraph shading” have been produced.

It is estimated by the British Dyslexia Association (BDA) that somewhere around 4% of UK’s population currently suffers from what can be classified as a “severe form” of the disability itself.

You can download OpenDyslexic here and you can support the UK’s Dyslexia Awareness week by signing this government e-petition to propose that all teachers should be trained to understand dyslexia here too.