Bouncing business extrovert Steve Ballmer has softened on his stance with regard to the Linux operating system, which he had famously previously derided as a cancer. 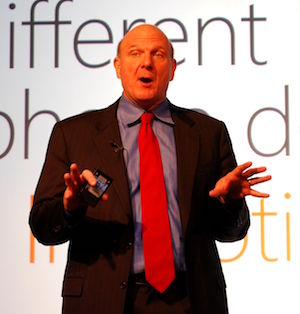 The former Microsoft CEO is now more focused on his role as owner of the Los Angeles Clippers, a baseball or basketball team.

Ballmer’s initial cancerous jibe was made some 15-years ago, but since that time his former employer has made inarguably significant strides to both open source a degree of its software stack and move to supporting Linux on those elements that it still keeps within more proprietary control.

Reuters reports Ballmer’s comments made at a dinner this week where he said that the threat from Linux was now “in the rearview mirror”.

“The company made a ton of money by fighting that battle very well,” he said. “It’s been incredibly important to the company’s revenue stream” to maintain its position with its own Windows operating system.

Baller’s original comment was, “Linux is a cancer that attaches itself in an intellectual property sense to everything it touches.”

The former CEO is reported to have recently taken up yoga — no information on yoga-centric bouncing positions is currently available.