Do open source projects get too many birthday presents? I mean to say; proprietary vendors aren’t really allowed to celebrate 10-year anniversaries are they? They have to come out with a substantial product update to make the news right?

All the Eclipse community has to do is get to its tenth birthday and we’re all keen to help hang out the party lights. I’m playing devil’s advocate of course, we like to mark open source birthdays as this is after all the “community model” of development, so annual milestones are a good time to see what has been achieved over a defined period of time.

This November Eclipse does indeed make it to double figures as it is now 10 years since the start of the Eclipse open source project. In November 2001, the Eclipse IDE and platform were first made available under an open source software license. IBM made the initial $40 million contribution of technology to start the Eclipse project that has now grown to technology commons with an estimated value of over $800 million.

Eclipse by numbers at 10-years on

• 1057 committers located around the world, more than half in Europe

• 50+ million lines of code across all Eclipse projects

• 174 member companies of the Eclipse Foundation

The Eclipse Foundation suggests that its annual Eclipse Release Train has demonstrated how open source communities can deliver in what it calls a “predictable and reliable manner” — reminding us that for the last eight years, Eclipse has shipped a major release at the end of June, on time to the day.

“We are incredibly proud of what Eclipse has accomplished over the last ten years,” explained Mike Milinkovich, Executive Director of the Eclipse Foundation. “The combination of a strong technology platform, a vibrant commercial ecosystem, the right community model, and passionate individuals has made Eclipse a worldwide industry success. Moving forward, we see Eclipse as the place for continued industry innovation and collaboration. The next ten years are going to be just as exciting! Projects like Orion, Xtext, Mylyn, JGit, Virgo will keep Eclipse an exciting place.”

The Eclipse ecosystem is now reportedly made up of millions of individuals, thousands of companies and thousands of universities and research institutes that have grown up around the platform. Who wouldn’t want to have a party then?

Developers can add their names to the Eclipse community timeline here: 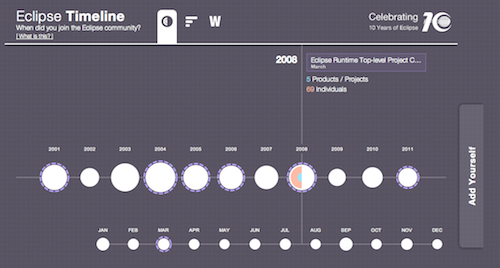