It’s always tough when vendors start their company name with a number… primarily because no sentence starts particularly well with a numerical value.

But it worked for 3M, so let’s move on to 3T Software Labs, an independent MongoDB tools company.

The highly numerically named Studio 3T 2021.6 (it’s release 6, this year – the clue is in the name) promises to make it easier to take SQL-compatible data and move that to MongoDB.

By integrating Hackolade’s cross-platform database data modelling, automated denormalisation technology and lineage tracking to the Studio 3T migration process, developers can take their existing data models and turn them into mappings that can be used to migrate over.

Was that automated denormalisation technology?

Yes, as TechTarget reminds us, denormalisation is the process of adding precomputed redundant data to an otherwise normalised relational database to improve read performance of the database. Normalising a database involves removing redundancy so only a single copy exists of each piece of information. Denormalising a database requires data has first been normalised.

“Making it easier to migrate from SQL systems to MongoDB helps developers be more productive. With the latest version of Studio 3T, developers can move faster and more securely to MongoDB, knowing exactly how the data is mapped.” commented Graham Thomson, CTO and co-founder, 3T Software.

After designing the Hackolade data model with the Data Definition Language from their SQL database, developers can then quickly import that same model and complete their configurations.

“This kind of tooling integration between 3T and Hackolade was developed due to customer demand. This comes as organisations realise that the old relational paradigm of data management is not fit for modern data loads. Studio 3T and Hackolade together make it simple and fast to move off legacy SQL systems of all types and onto the modern database platform of MongoDB,” commented Oliver Pearce, AVP of Global Partner Programs, MongoDB.

The new version of Studio 3T supports SQL to MongoDB migration that works with MySQL, SQL Server, PostgreSQL, Oracle, IBM DB2 and (blast from the past, but still used by some) Sybase… a video explaining Studio 3T and Hackolade integration is here for more. 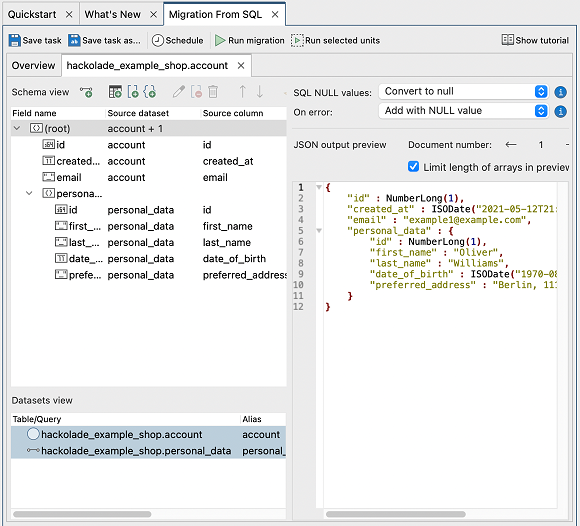