I met up with the CEO of IT services firm iGate,  Phaneesh Murthy, today.

Just to explain the headline. In 1992 apparently Infosys was thinking about shutting down because its revenue had plateaued at $2m. Murthy was asked if he fancied moving to the US, with $40,000 in hand, to get business going there. Although it had customers in the US id didn’t really have a presence in terms of sakes and consultancy. He changed this and 10 years late in 2002 its revenues were $750m.

It was good to catch-up with Murthy to find out how things were going at the company that acquired Indian IT services firm Patni for $1.22bn a year ago. 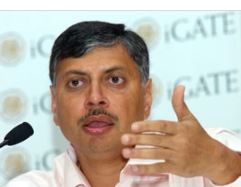 This was an interesting story because at the time of the acquisition iGate was much smaller than Patni. For example it had 6000 staff compared to the 18,000 at Patni. iGate had revenues of about $280m compared to Patni’s $700m.

iGate had also looked closely at Satyam when it was up for sale following the billion dollar fraud of a former Satyam chairman.

The plan was to build scale through the Patni acquisition and transfer iGate’s established outcome based services to the combined company, which meant transforming Patni from being a firm that made its money from time and materials. The acquisition immediately gave iGate a huge Indian workforce for its programming.

So it is worthwhile outlining the companies proposition. Before it acquired Patni, iGate was largely focused on the mortgage sector in the US. It would do end to end processing for mortgage providers, from sale to funding. Its differentiator was the fact it did not charge for time and materials but for each transaction completed.

Murthy says the company will now transfer this outcome based philosophy to the Patni business. He believes the time is right for outcome based contracts for three reasons. The IP and delivery models, which includes the cloud, are maturing; customers are finding it hard to predict revenues and business volumes; and the need for cost reduction is becoming more and more important.

iGate targets businesses that sell products that are not physical. This includes finance firms that sell non physical items. Manufacturers that sell physical goods are not targeted. Murthy says this is because iGate wants to take entire processes off the hands of its customers and provide it more effectively at a lower cost.

He says the value is in iGate’s IP so it takes over the running of processes using its own technology.