O2’s iPhone exclusivity ended with the announcement that Orange and then Vodafone would be supplying the Apple gadgets to punters.  Orange have already launched, while Vodafone are set to begin distributing the popular handset in 2010. Now there’s a fourth player in the market.

Tesco.
Yes, Tesco.  The shop where you get your oven chips, Brillo pads and White Lightning.
Just last week I overheard someone on Twitter moaning that they were on a train full of folks toting iPhones. People wearing tracksuits and reading The Sun, old age pensioners and mucky kids with jam on their faces.
Normal people.
“Has the iPhone stopped being cool?” he tweeted.  Of course, some wags replied that the iPhone had never cool.  It was, at best, geekily chic; totemic of IT’s affluence in the noughties – a time where programming and interface design have been the only steady jobs left.
But even though O2 had an exclusive contract, the iPhone was always too beautiful for geeks.  And, unlike the PC market, there was no monopoly to hold back Apple’s populist championing of form and function. The iPhone was unlike any mobile out there. It was (and is) the perfect marriage of industrial design, operating system and, in the App Store, backend service. Of course everyone wants one.
Has the iPhone jumped the shark? We think that its moment of kudos has passed. Gadget geeks may graduate to other handsets;  to the Motorola Droid and the HTC HD2.  That means the rest of us can continue enjoying one of the best mobile platforms ever conceived, free of the need to be cool.
By the way – we got a sneak peek at the packaging for the Tesco iPhone launch: 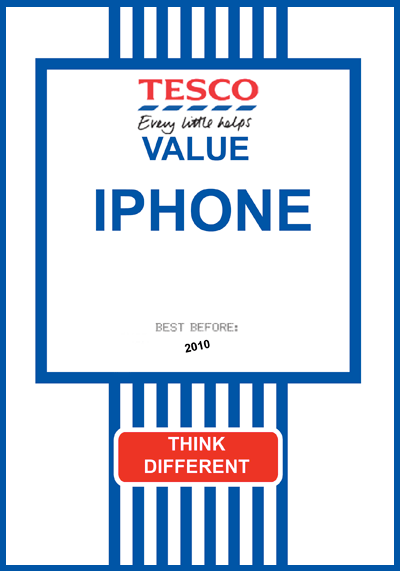