Latest Blog Posts
Related Content
BlogRoll
Latest News
Download Computer Weekly
Forget the BlackBerry Storm2 9520 that Vodafone rolled out on the 26th October (free on a two year, £30 a month contract). Forgot it? Aces. There’s some brand new pretend-iPhone goodness coming in the shape of the Samsung 360 H1 on the 30th of October.  As I type this, Vodafone are unveiling their new 360 service and the Samsung handset to tech journalists at a secret location in West London – but you can virtually try it out right now.
Click on “Try Vodafone 360 for Yourself” and you’ll get to play with a Flash powered 360 phone. Unfortunately, it doesn’t make calls like the real thing. Nor is there a “Charlie and the Chocolate Factory” style facility to reach into the monitor and grab the handset for yourself. I know, because I tried.
The Samsung 360 H1 is the first phone to offer Vodafone 360, a web service that integrates contacts from social networks Facebook, Windows Live and Google. You can follow your friend’s status updates, organise them into groups and pick up email from personal accounts.
First impressions? The iTunes Cover Flow style address book interface looks pretty fancy and the Samsung 360 H1 is a high-end phone to bundle into a contract – but I prefer to search for contacts rather than flick through them. The 360 will be available on contract plans starting at £35 a month. 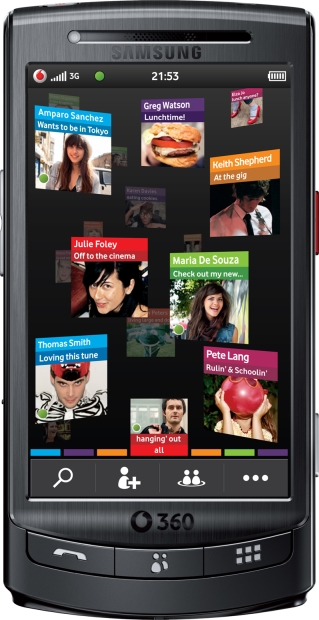