Blackberry first unveiled the Playbook back in September last year, since then we’ve seen and heard a lot about it.

Sadly for RIM we’ve also seen millions of iPad sales and the iPad 2 get it’s launch before the Blackberry tablet.

I got my hands on the Playbook and I have to admit, it’s a really nice device.

Sie-wise it’s great with a 7″ screen and good thickness to it, you feel good holding it. It’s not awkward like the first iPad.

It can handle games and video perfectly as you would expect, and can handle a number of them at the same time.

Open apps appear like cards, similar to WebOS, and stay running when put in the background.

There weren’t many apps but the ones I got to play with worked well.

So how does Blackberry hope to compete with Apple? They brag that you get the ‘full web experience’ on the Playbook with HTML5 and Flash 10.1 that you wouldn’t get with the iPad. 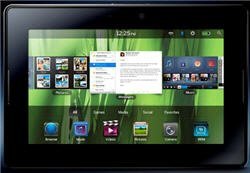 See photos of the Blackberry Playbook

While this sounds good, what would’ve been better is to have a Playbook version of Blackberry Exchange Server. The boys at Blackberry couldn’t give me a straight answer as to whether this will be available in the near future.

On the whole I was really impressed with the Playbook. As a device it was well built and the operating system was easy to use and quite intuitive. It seemed to handle whatever I threw at it and is a great size.

Is it better than the iPad 2? I doubt it from what I’ve seen but this is definitely a welcome addition to the tablet market.

I was surprised that this will mainly be a consumer tablet but I’m sure Blackberry will develop apps etc. to make the Playbook something that’s for work and play.