The fundamental Boogie Board technology has been around for 20 years under the name Kent Displays, but for the last two years the company has concentrated on producing touch slates which replace the need for paper notebooks.

The cholesteric liquid crystal display (ChLCD) screen was developed out of the company’s R&D, and the slates remind me of a darker Kindle screen.

English: The Taj Mahal, complete with ripples in the reflection (Photo credit: Wikipedia)

The basic tool slate (£30), is a simple slate which when it was launched, was thought that it would be aimed at children – think a modern day etch-a-sketch, just write on the slate and press the erase button to wipe away. However, the children’s market only takes up 40% of sales. The Boogie Board is very popular in Japan as electronic stationary, but 5% of the market share actually comes from call centres who find that it is safer to write notes regarding sensitive information and quickly erase it again.

The basic slate requires no power to generate or retain an image, and only a small amount to erase (supplied by a small watch battery, which will execute over 50,000 erase cycles).

The next stage Boogie Board (£80) connects to a computer via a micro USB, and as you write on the slate it can be seen replicated on the computer screen, alternatively it can be written away from the computer, connected and saved before erasing. I also played around with a prototype of the next generation device, which will be launched in Q4 2013, giving the Boogie Board wireless connectivity via Bluetooth. 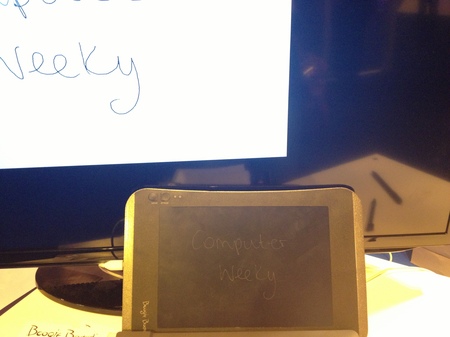 It’s not particularly glam, or sleek like a tablet, but I can definitely see the appeal in utilities, call centres and in health care.