Welcome to the second edition of the Computer Weekly Complete Guide to Audio. Last week, my colleague, Matt, sampled a range of headphones available at the moment, from all-round general use to the desktop listening.

Giant headphones seem to be on trend at the moment, with “hipsters” showing off their headgear on the street. Whether you like to show off your kit or keep it on the down-low with buds, there are plenty to choose from on the market.

This part looks at noise cancelling headphones as well as a pair of dynamic bass headphones.

My first reaction to these headphones were that they are huge – Colossal even in the current market of headphones! I was shaking my head looking at the semi rigid case they belong in which I think is larger than the case for my first ever CD Walkman. 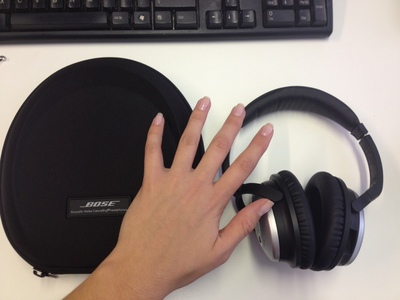 But wait, wait, wait… don’t disregard this gadget due to its size, apparently the best things DO NOT come in small packages.
I popped the included AAA battery in the discreet compartment on the right earphone, placed them over my ears and flicked the switch on the side and welcomed the sudden utter silence.
If you haven’t experienced the joy of noise reducing headphones before, it’s quite difficult to explain. In the office for example, any background noise from traffic outside, printers or servers diminishes and work colleagues sitting close by become significantly reduced in volume. It was very much like sitting in my own little bubble.
Sadly I wasn’t jetting off anywhere on a plane this week to try them out properly, but I can only imagine how satisfying it would be to be sitting next to somebody with an average set of earphones struggling to hear their music over the noise from a flight. Instead, plug the wires into the headphones and the other end into your audio source and you can hear every note without distractions.
I did, however, test them on the tube and I have never experienced such a peaceful rush hour journey. I don’t recommend wearing them on the underground regularly however, as you will easily miss announcements and people trying to pass you muttering ‘excuses me’ which may inflict a few evil glares.
A nice addition was the fact that Bose provide you with an AAA battery, audio jack adapter for the plane as well as two sets of wires, one specifically for Apple products. When using with Apple products the headphones come with a small remote and microphone.
If you run out of spare AAA batteries then you will have to resort back to your standard Apple earphones as the Bose headphones don’t conduct any sound without a battery – leaving you with an overpriced pair of ear muffs. Sadly I wasn’t paired with the headphones long enough to find out how long the AAA battery lasts, but Bose state that the average AAA battery will provide 35 hours of use, which should see you through even the longest flight.
After a short while wearing them while writing this post, I found they were a little heavy on my neck, however, with your seat reclined and head back on a long haul flight this wouldn’t be a problem at all.
Who these would suit? The frequent flyer, I know I initially moaned at the size of the headphones, but that was before the enveloped my ears in delicious silence. If I was lucky enough to own these I would make space in my overhead luggage at any cost to include these on every flight.
Pioneer SE – CL541i-k Closed Dynamic Headphones
RRP: £29.99
I have been using these earphones on and off for about a week, they’re extremely portable being the bud style rather than the over ear variety and come with a nice little drawstring felt bag to protect them.
Initially popping the buds in my ears was very uncomfortable. They conveniently come with three sizes of earphone tips which enable the bud to go deep into your ear. They come with ear holders (an odd triangle addition to the average shape earphone) which are designed for extra stability and apparently comfort.
It took some getting used to, but once my ears were used to the unusual invasion, I found them quite comfortable and very secure. 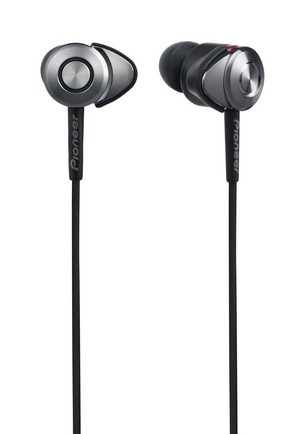 The dynamic bass kicks in when the buds are thoroughly plugged into your ear, if they’re not securely inside your ear then the music is to some degree tinny. As soon as you press them that little further, the earphone tips seem to suction and the 10.5mm dynamic bass driver kicks in. Not only that, but due to this suction method the earphones act to some degree as noise cancelling.
These headphones are designed especially for use with Apple products, with built in microphone, call answer button and volume control.

Who these would suit? The Apple consumer who likes quality bass and the ability to integrate calls.
Pioneer SE-NC21 (noise cancelling headphones)
RP: £99.99
My Initial thoughts were that the headphones were not as large as the Bose headphones and came in a smaller sturdier case. While not enveloping the ears completely, they sat very comfortable on top of my ears, but they did become a little hot and sweaty after extended use. 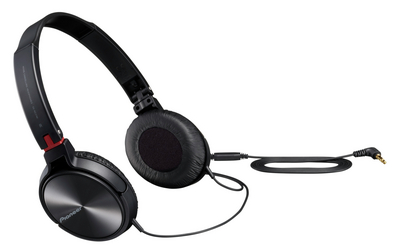 Pioneer state that it reduces ambient noise by 90% and once you place in the included AAA battery and flick the switch, the background noise from the office and traffic outside does indeed disappear. But noise from work colleagues, phones and keyboards in the room was still clearly audible.
Batteries last around 120 hours with the average alkaline battery, and when they run out, the noise-cancelling function stops working, but they still work as headphones. However, the sound quality reduces significantly, echoes and becomes a little too bass-heavy without the noise cancelling switched on.
I tested them out on public transport and the fact that I nearly missed my stop is surely a good sign that I was engrossed in my music and there were minimal exterior distractions.
Compared to the Bose headphones they do not reduce noise as significantly, but for a third of the price, they work very well and also don’t make you feel as if you are sitting in a fish tank. They also come with an in-flight plug adapter.
Who these would suit? The all-round user who also flies a few time a year.
* Review note: While my colleague, Matt, chooses Peter Andre’s back-catalogue for testing audio quality, I’d sooner check for decent sound using Disney’s Lion King opening number, The Circle of Life, for its dulcet undertones and quivering high notes.