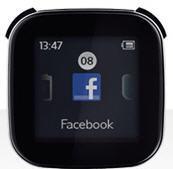 Trying to describe the Sony Ercisson LiveView isn’t easy because it’s quite a new idea. It’s basically a tiny square device with an OLED display that synchs to your phone via Bluetooth and receives information such as texts and emails so you don’t have to pull your phone out.

Actually that wasn’t too hard but it doesn’t really have a name, so whenever someone asks me ‘what’s that?’ I have to literally say the paragragh above instead of ‘it’s a smartwatch’.

In fact, that’s what I’m gonna call it. A smartwatch.

The actual device, I mean smartwatch, is very light and doesn’t look too bad with a bright and clear screen I would say it looks quite cool.

Everything appears on 1.3-inch 128 x 128 colour OLED display remarkably clear. When I realised it was OLED, I genuinely thought “I have to buy one!”

Then you see the strap and realise where the costs were cut. It’s a black crappy velcro strap with nothing nice or special about it. In fact, when I wear it, I hope people don’t even see it and concentrate on the smartwatch.

Buttons are limited to a power button, with a multicolour LED on the top left corner and a second button on the top right to select with. On the bottom edge there’s a microUSB port for charging, covered with a rubber flap.

The black frame of the screen is the only touch-sensitive part of the device. Again probably a cost-cutting measure. When you compare that to the iPod Nano, you feel they should’ve just gone with the touch-screen and made it more expensive, never mind.

So what does it actually do out of the box??

Well, if someone calls it shows who the caller is and you can mute the ringer but not actually answer the call which is great for meetings or the cinema etc.

You can see the first line of any text messages you get and you can view Facebook and Twitter updates. 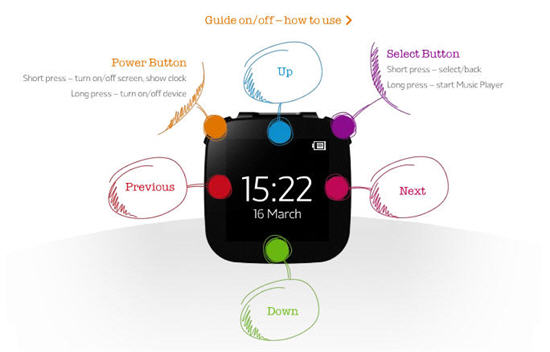 You get basic music player control (play/pause, skip and back) and a pretty useless calendar that only shows the next appointment.

So far so good.

Sony Ericsson has done a great job in opening up the SDK for third-party app developers. You find around 20 on Android Market ranging from diallers to basic Google Maps widgets that show you where you are.

Sony Ericsson deserve so much credit for coming out with something so inventive.

At this point, you should be on Amazon checking how much the LiveView is and taking out your credit card.

The main problem is that connection drops constantly. I had got it up and running and was looking very pleased with it sat on my wrist when suddenly connection was lost.

My phone, HTC Desire, wasn’t far it just lost connection. The main problem with that is that the smartwatch doesn’t hold anything on-board. It completely relies on your phone to display anything including the time!

Once I can let it go, but this was constant pain.

Yet another problem. Sony Ericsson say that it should last 4 days but mine only lasted two and drained my phone’s battery due to the constant info exchange and bluetooth being on constantly.

All in all, not good. Especially as I was wearing it instead of my watch.

The installation should be quite straight-forward but isn’t mainly due to the fact that you need a couple of apps to get it all going which isn’t too bad but the process took a lot longer than I thought it would.

Potentially this could be awesome. The idea is so good but the execution is so poor.

The main problems are that the connection drops and the battery life is poor. Those are big problems!

I love the LiveView when it works. Honestly there was a period where it was fine and I thought, I want one.

The price is fantastic too; it’s currently on Amazon for just £45 (see below).

For that price, many will feel it’s worth a punt and others will see it as a wasted opportunity. Which is exactly how I feel.

I really wanted to love this device. It’s a great idea and something new.

However every time I started to believe in it, it failed me.

Now I believe that Apple will make the Nano have these capabilities and synch to your iPhone with a special Nano strap (in a variety of colours and types).

This will steal Sony Ericsson’s thunder and really emphasise exactly how much of a lost opportunity this is for them.