SanDisk’s Sansa Clip+ competes with Apple’s iPod Shuffle in the miniature MP3 player arena. It’s an unfair battle because the Shuffle has the magical iPod tag even though the Clip+ is the most impressive of all SanDisk’s personal entertainment range. In this review we’ll compare the 4GB versions of each model.

The Clip’s memory can be boosted by up to 16GB using a Micro-SD card for around £32 or, more economically by 8GB for just over £11. This means that at £35 for the Sansa and £59 for the iPod, the Sansa has a massive advantage in the total memory stakes price for price. 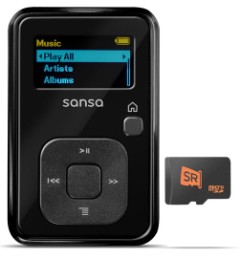 This advantage is further enhanced because the functionality of the Clip goes way beyond the Shuffle. The iPod is a music-only system whereas the Sansa has FM radio and sound recording built in. The quality of the radio is very good and the recording capability is stunning. I’ve used the Clip as a recorder during several interviews in noisy exhibitions and for private interviews in hotel suites. In both cases the quality of the recording has been excellent – actually better than an Olympus digital recorder that I’ve been using for four or five years. The only down side is direct recording of the radio output introduces a slight hiss, not enough to be annoying but a noticeble downgrade of the quality.

The Shuffle’s slim advantage is its size but the difference is not massive. The Clip is a centimetre taller, double the width and twice as thick. However, the Shuffle has no screen whereas the Clip+ has a four-line screen and a control pad. this means that it is not reliant on playlists like the Shuffle and can be programmed to play by artist, album, genre or just randomly. Shuffle users only have an electronic DJ facility, VoiceOver, to announce the tracks – technically brilliant, useful for the visually impared but ultimately annoying. 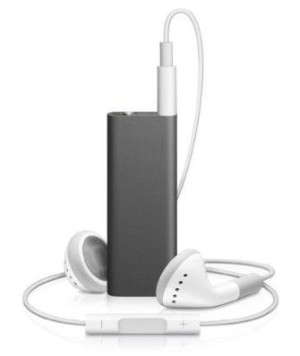 Another irritation is that the Shuffle’s inline controls are on the earbud lead. This means there are no options to upgrade the earbuds to better quality earbuds or headphones unless you want to only use autoplay and have no control over what you listen to. Even the iPhone and iPod units with inline controls do not work with the Shuffle. No such restrictions on the Clip. Use any earphones and remain in control.

Battery life seems less of an issue. Apple claims around ten hours, Sandisk says 15 hours. Frankly, anyone listening for such extended periods need their heads looking at – and certainly their swollen ears. However, it’s comforting to know that you can go away for a weekend without needing to take a charger.

The Sandisk Sansa Clip+ is far superior to the Apple Shuffle but will, no doubt, trail behind in sales because of the lack of that iPod tag.